2020 Elections: My political opponents will have no message – Akufo-Addo 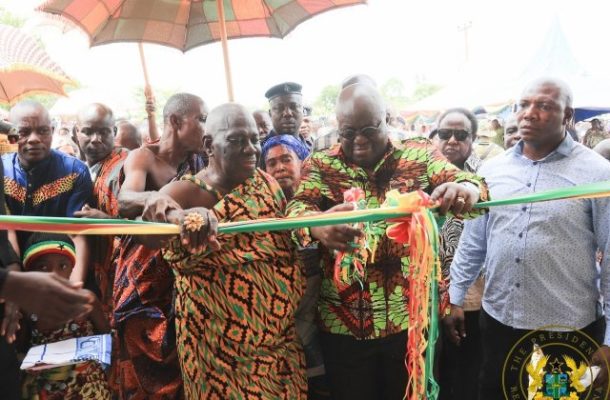 The President has scoffed at his political opponents saying, they would have no campaign message going into the 2020 elections as he would have fulfilled his 2016 campaign promises by the end of his first term of office in 2020.

President Nana Akufo-Addo said the same people who are saying his administration has done nothing over the last 16 months in office are the same persons who, prior to the 2016 elections, stated that Free Senior High Schools (SHS) policy was not possible.

“One by one we are keeping our promises. Free SHS is now a reality. In September this year, the Free SHS policy will cover new entrants, in addition to those who will then be in SHS 2.

"By September 2019, it will cover all students in Senior High Schools across the country. Teacher and nursing trainees are also receiving their allowances,” he said

Addressing a durbar of chiefs and people of the Asutifi South, Asutifi North, Asunafo North and Asunafo South constituencies, on day 2 of his 3-day tour of the Brong Ahafo Region, he said government retired a large chunk of the NHIS debt left by my predecessor.

“To those who say they are still not seeing anything, they should wait and watch me. By the end of the four years, they will have nothing to say. They will acknowledge that we came to work for the development of Ghana,” he added.

As part of his tour, President Akufo-Addo cut the sod for the construction of an administrative block for the Asunafo South District Assembly; and inspected the newly constructed bridge for residents of Asumura in the Asunafo North constituency.

President Akufo-Addo also commissioned the newly constructed special ward at the St. Theresa’s Hospital at Hwidiem in Asutifi South; and inspected the 68-bed hospital and semi-detached maternity block, which is under construction at Kenyasi in the Asutifi North constituency.