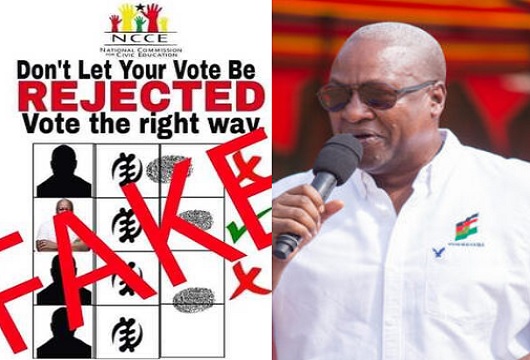 The National Commission for Civic Education (NCCE), has refuted media reports claiming it has endorsed the presidential candidate for the National Democratic Congress ahead of the 2020 general elections.

A sample ballot paper with the NCCE's logo is currently in circulation on social media under the caption "Don't Let Your Vote Be REJECTED Vote the right way."

Lying second on the said poster is the former President, John Dramani Mahama, whose image is ticked green, suggesting the NCCE's 'right candidate' to be voted for in the December polls.

But, the independent, non-partisan governance institution in a statement denied any knowledge of the flyer which sought to "mischievously" link them to the endorsement of candidate Mahama.

According to them, the poster is "fake" and not sourced from their office.

The NCCE's attention has been drawn to a fake poster of a sample ballot paper with the Commission's logo circulating on social media which mischievously seeks to imply the endorsement of one of the Presidential candidates in this year’s election.

The Commission states categorically that the said poster was not authored by the NCCE.

Ahead of the December 7 polls, the NCCE has as part of its responsibilities, intensified civic and voter education nationwide.

The Commission has also appealed to all political parties to preach peace and contribute to a violence-free election.