2020 Supreme  Court  election  petition: Which Justice are making up the panel? 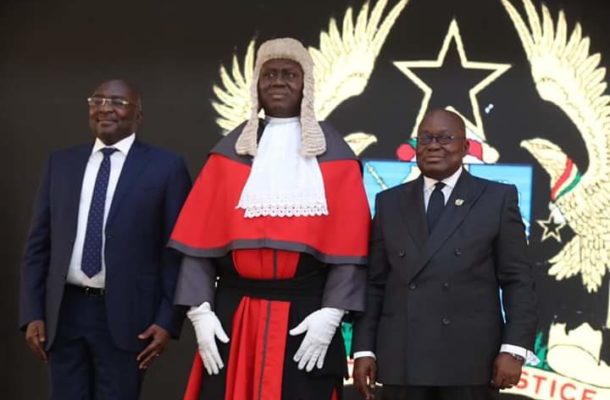 "I think we need to uncover them in order to correct them also, because Judges should not, indeed, let political partisanship be the determinant of positions they take”
*~ Tsatsu Tsikata Esq. (2012)*

The revelation by NDC MP for Asawase Constituency in the Ashanti region, Hon Muntaka Mubarak that a Supreme Court Judge led an attempt to influence a colleague NDC MP-elect to vote for Prof Mike Ocquaye to become the Speaker of Parliament has aroused the interest in the topic as to which Supreme Court Judges would make up the panel for the impending 2020 Election Petition.

This is so important since the outcome of the case has the tendency to strengthen or cause Ghana's fragile democracy, particularly that some decisions from the Supreme Court in the recent past have created some amount of loss of faith in the system.

But to start with, what crime has Ghana committed that Supreme Court Judges who have sworn an oath to be just would rather reduce themselves to the status of NPP lobbyists and interveners??

Now, on the matter of empanelling the Judges, in 2012 for instance, the Chief Justice (CJ), Georgina Theodora Wood was not part of the panel that presided over the Supreme Court Petition.

It was public knowledge that the CJ Georgina Wood and H.E. John Mahama who was a party to the case are both members of the Assemblies of God Church and worshiped at the same Ringway Estate branch.

It was again public knowledge that CJ Georgina Wood was H.E. John Mahama's Sunday school teacher and so that among other things made her to recuse herself from the panel.

CJ Georgina Wood in doing the empanelling, took into consideration the overriding national interest and ensured appreciably balanced panel. A panel whose judgements or outcomes one could not easily tell and made almost the entire country sat on edge because the likelihood of the case going either way was very high.

Today, the question lingering on the minds of many is whether we are likely to see the same situation play out again under CJ Anin Yeboah?

Is it likely that CJ Anin Yeboah would recuse himself from the panel? Or he will defy the precedence set by Madam Georgina Wood and impose himself on this panel?

There are issues of Justice Anin Yeboah's political affiliations and bias rulings that he himself never deny or run away from.

Lawyer Tsatau Tsikata during the 2012 election petition had had to put it out publicly because of he, Justice Anin Yeboah's consistent ruling against H.E. John Mahama and the NDC in the matter.

There are other cases of him, Justice Anin Yeboah always displaying dislike for the NDC and wishing the party loses elections, in some cases describing NDC followers as people who are out of touch. Lawyer Chris Ackummey would always recount this about him (CJ).

In NDC circles, there's the conviction that the continuous threats and some complaints before the General Legal Council (GLC) about some vocal NDC lawyers are influenced by CJ Anin Yeboah merely to show people where power lies.

Such actions/perceptions as we keep witnessing, endangers our democracy and must someway somehow be eschewed or curtailed to take away any danger it brings. We have this democracy to protect.

While at that, we are again asking the question; why has CJ Anin Yeboah not taken a cue from what his predecessor Georgina Theodora Wood did in the 2012 Petition?

Are we to believe the claim that CJ Anin Yeboah is going to be the eye on the Panel and to literally whip others in line for a political biddng?

Beyond that, are we going to see an appreciably balanced panel of Judges as was the case in 2012? That is to compose a panel which is not populated and dominated by Judges appointed by President Nana Akufo Addo.

Again, even in having Nana Akufo Addo appointed Judges on the Panel, why must it not be the exceedingly independent minded and free thinking kinds?

Is CJ Anin Yeboah going to grant that to Ghana? We more than need it.

God bless our home land Ghana.
And make our Nation great and strong.