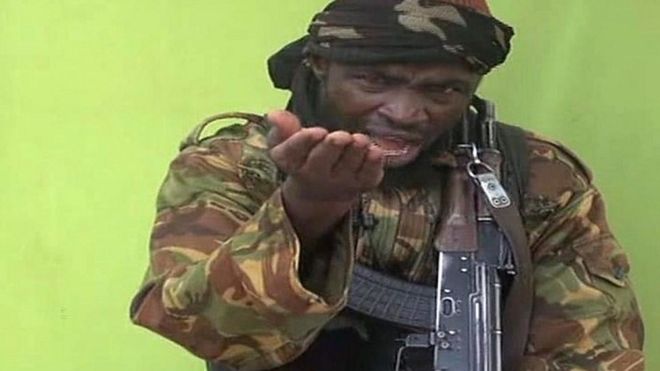 The disputed leader of Boko Haram has said he is still in charge of Nigeria's militant Islamist group despite a statement by so-called Islamic State that he had been replaced.

Abubakar Shekau denounced the IS declaration that Abu Musab al-Barnawi was now leader.

Shekau accused al-Barnawi of trying to stage a coup against him.

Boko Haram is fighting to overthrow Nigeria's government and establish an Islamic State in the north.In the last 18 months it has lost most of the territory it had controlled after being pushed back by an offensive by the forces of Nigeria and its neighbours.

Shekau was last heard from in an audio message last August, saying he was alive and had not been replaced - an IS video released in April said the same.

In a 10-minute audio message in both Arabic and Hausa, Shekau appeared to distance Boko Haram from IS, but still called its leader Abu Bakr al-Baghdadi "caliph".

He said that some in Boko Haram had stopped him communicating with al-Baghdadi.

"I was asked to send my ideology in writing to the caliph but it was manipulated by some people in order to achieve their own selfish interests," he added, describing a coup attempt against him.

He said he had sent eight different letters to IS leaders but they did not act on them, only to hear the news that he had been replaced.

He then described al-Barnawi and his followers as polytheist.

Shekau had been accused of hoarding food and ammunition and also of driving away IS military advisers.

BBC's Abuja bureau editor Naziru Mikailu says this split is likely to have a major impact on the way the group operates and could be a turning point in the fight against the insurgents.

Boko Haram at a glance:


Shekau took over as the group's leader after its founder, Muhammad Yusuf, died in Nigerian police custody in July 2009.

Under his leadership Boko Haram became more radical, carried out more killings and swore allegiance to IS in March 2015.

In numerous videos, Shekau taunted the Nigerian authorities, celebrating the group's violent acts, including the abduction of the more than 200 Chibok schoolgirls in April 2014.

Nigeria's army has claimed to have killed him on several occasions, and he has not appeared in a video since Boko Haram aligned itself with IS.