325 artisans in Koforidua gets GNPC supports 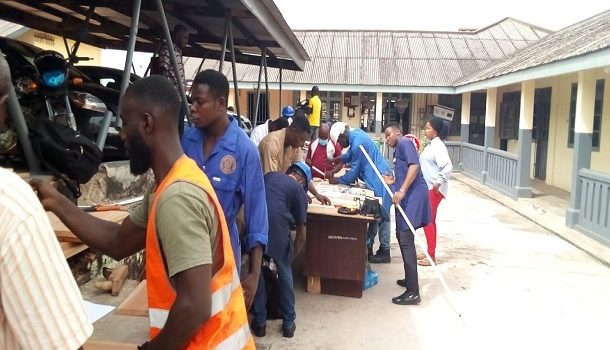 The GNPC Foundation’s livelihood empowerment program, the Skilled Artisan Project (SAP) being implemented in partnership with ASEDA Foundation, is sponsoring the training and National Vocational Training Institute (NVTI) certification of some 325 artisans in the Eastern Region.

The beneficiary Artisans started the training from Tuesday 15th March to Friday 18th March, when they will finally sit for their NVTI examination.

Mr. Kwame Karikari, Head of the Economic Empowerment Unit of the GNPC Foundation,  at the training explained the training will enhance the employability of young artisans and empower them to pursue their entrepreneurial dreams.

According to him,  GNPC, in the 2021/22 edition of the project, is supporting a total of 2050 artisans across 6 regions namely; Greater Accra, Eastern, Ashanti, Central, Western, and Western North regions.

He explained that “This is, among other things, our contribution to supporting and building the capacity of Ghana’s youth to ensure as many of them as possible become economically independent to support themselves, their families, communities, and Ghana at large".

He said the beneficiaries will further be provided with soft skills training in standards of business and entrepreneurship.

"The Business Advisory Centre (BAC) of the National Board for Small Scale Industries (NBSSI), will take them through course models such as Book-keeping, Marketing/ Sales, Branding, Customer Relations, Attitude to Work, Safety at Work and Entrepreneurship" he added.

Despite the low participation in the technical field in the Eastern Region and the other regions except for the Western region, Mr. Kwame Karikari is optimistic that more women will show interest if the subsequent phase of the training is being introduced.

The CEO of ASEDA Foundation, Diana Adjei also said, "through the support of GNPC, the ASEDA Foundation is helping to train artisan free of charge after which these artisans undertake NVTI exams and finally receives set up tools to open up their shops".

However, she advised the youth to avail themselves and delve into artisanship through ASEDA Foundation so that the necessary support is given to eradicate or reduce the youth unemployment situation bedevilling the country.

Some of the beneficiaries revealed that initially they were challenged with approved and recognized certification even though they have acquired the necessary skills as artisans which makes it at times very difficult for them to be awarded contracts but for the intervention of ASEDA Foundation and through the Support of GNPC, they now have their certificates which now makes it easy for them to win contracts.

Therefore, they expressed their appreciation and gratitude to ASEDA Foundation and GNPC for the timely intervention to sustain their trades and businesses.

After the successful programme, the artisans will later undergo a graduation ceremony where each would be handed a set of tools relevant to their skills to help set them up for their entrepreneurial journeys.