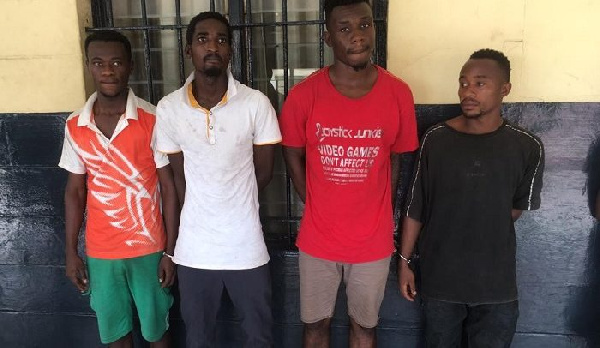 The four suspects in police custody

A joint police operation has led to the arrests of four out of six men who are alleged to have detained two girls and sexually assaulted them in turns.

The suspects have been identified as Benjamin Mensah, Vincent Avi, Samuel Otoo and Kingsley Chidi, a Nigerian.

The two, who are currently at large, have been named only as Seth and Senior, according to the police.

The victims, who are both 15 years old and in primary four, have been handed over to the Social Welfare Department for Counselling after being examined at the Police Hospital and confirming that they were sexually abused by all the suspects.

The Accra Regional Police Public Relations Officer, Deputy Superintendent of Police (DSP) Effia Tenge, said on February 8, 2020, parents of the girls reported to the Odorkor police about their disappearance from school.

She said a publication was made to that effect and it was established that on February 7, an elder brother of one of the victims spotted them at Mallam Junction, Accra, and questioned them as to why they were not in school.

DSP Tenge said the girls could not give any explanation and they were asked to go back to school.

She said on February 13, the aunt of one of the victims received a telephone call from one of the suspects, Samuel Otoo, demanding money for the upkeep of the girls.

“The police were immediately informed and on February 14 around 10:30 pm, a joint operation between the Gbawe Lafa Police and Nyanyano District Police Command led to the arrests of the four suspects from their various hideouts at Kasoa,” she narrated.

She said police preliminary investigations revealed that the suspects left school on February 7 around 11 am to meet Seth and Senior at McCarty Hills.

She said Seth and his gang then sent the girls to their Gomoa Nyanyano residence where they kept them and had sex with them in turns.

It turned out that the examination revealed one of the victims was a virgin.

“The police operation team grabbed the four suspects and rescued the victims in addition, but two of the suspects managed to escape arrest during the said operation,” she said.

“The suspects are in our custody and we are still conducting investigations into the case and would apprehend any person involved in this criminal act,” she added.