A 4 year old Ghanaian, Jake Amo, has been named by Nigerian entertainment platform KRAKS TV as its personality of the year, after a  famous picture of the young Ghanaian writing on a piece of paper went viral on social media.

The image of the 4 year-old boy from the village of Asempanaye, Koforidua in the Eastern Region, who  is pictured engrossed in his writing was shared by Ghanaian artist, Solomon Adufah, and  was chosen by KRAKS TV's

The famous picture shows a young African boy seated at a desk, with a pensive look on his face, frantically writing on a piece of paper, making him a darling of social of media, and subsequently winning the KRAKS TV's person of the year award 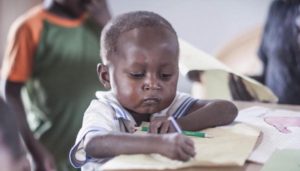 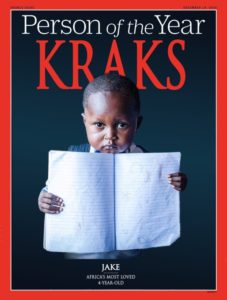 The iconic image was taken in August 2015 during Adufah's visit to his home country Ghana and the artist taught and mentored creative studies and art at Jake's school in Asempanaye.
The 27-year-old artist is currently pursuing fine arts at the University of Illinois, Chicago, in America. The photographer was accompanied by his friend and manager Cortes, who documented Adufah's work with the children.

The picture is currently amongst  the continent’s most famous and widely shared memes and it was taken by Carlos Cortes, an award winning photographer and was later shared by Ghanaian artist, Solomon Adufah.