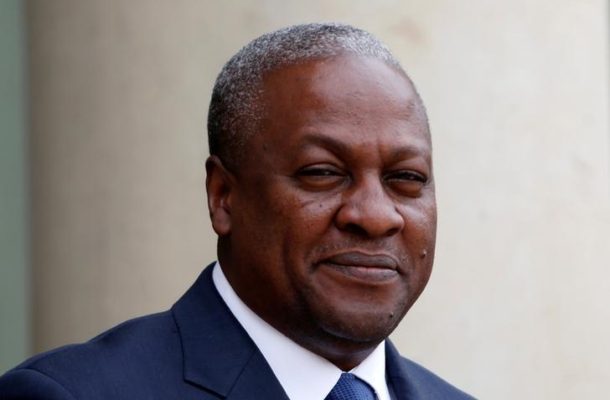 Ghana's President John Dramani Mahama arrives for a meeting with France's President at the Elysee Palace in Paris, France May 28, 2013. REUTERS/Charles Platiau/File Photo

Ghana's President John Mahama told supporters the country was overcoming its economic problems and promised a return to prosperity as he launched his campaign on Sunday ahead of what is expected to be a close-run election.

Ghana was one of Africa's fastest-growing economies at the beginning of the decade thanks to exports of gold, cocoa and oil. But growth has tumbled since 2014 due to a slump in commodities prices, leading to a fiscal crisis and unpopular austerity measures.

The economic problems have weakened the standing of Mahama, who will seek a second term in a presidential election on Dec. 7, when he will run against Nana Akufo-Addo, leader of the opposition New Patriotic Party (NPP).

On his first official day of campaigning in the seaside town of Cape Coast, Mahama, who has been in power since January 2013, said the economy was turning the corner.

"We have managed to sail through adversities," he told National Democratic Congress party supporters, who had spent the afternoon dancing and blowing vuvuzelas as they awaited his speech in the 16,000-seat Cape Coast Stadium, which was filled to capacity.

"Our focus in the last four years was to stabilizes the economy, and we have put the worst of our power crisis behind us," he said.

Continuing a theme of his pre-campaign speeches, Mahama highlighted investments in education, transport, electricity and healthcare as a sign of improvements to come.

Public debt stood at 71 percent of gross domestic product at the end of 2015, and two months ago Nigeria cut gas supplies to Ghana because of unpaid bills.

Akufo-Addo has criticized Mahama's mishandling of the economy and has pledged to restore economic stability, although he has not yet published his election manifesto.

Recent polls put the National Democratic Congress just 3 percentage points ahead of the opposition, with nearly 15 percent of respondents undecided, a senior source close to the government said in July.

"We are still grappling with blackouts despite the huge sums of money being spent by this government under the cloak of fixing the problem," said Seth Opoku, 58, pointing to a line of new black Toyota SUVs that had just brought party dignitaries to the stadium on Sunday. While he attended the rally, he said he doubted he would vote for Mahara.

"The boat is sinking and we need to change the captain," he said.