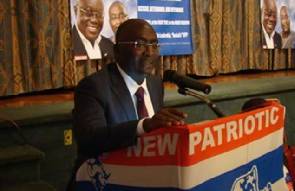 He said as a result of the mismanagement of the Ghanaian economy and “reckless” and “unbridled” borrowing; the country doles out more cash to make interest payments than it spends on infrastructural/ capital projects annually.

Delivering a public lecture on the theme: “The State of the Ghanaian Economy-A Foundation of Concrete or Straw’ as the nation inches towards the 2016 general election.

According to him, interest payments alone in 2015 stood at GHC9.6 billion, more than the total debt of Ghana at the end of 2008.

He disclosed that interest payment on the debt stock in 2015 was six times Ghana’s oil revenue.

“The oil discovery has basically been compromised over the last seven years by the government’s recklessness and incompetence, ”the NPP presidential running mate pointed out.

Dr. Bawumia noted that Ghana’s Debt total had ballooned from GHC9.5billion to GHC105 billion at the end of May 2016.

“The real effects of the reckless borrowing undertaken in the last seven years is seen in the magnitude of interest payments Ghana has been burdened with, which has meant that vital resources which should have gone into vital sectors, infrastructural development and social services, are now being pumped into settling our debt obligations.

“To put the interest payments on the debt in context, we should note that the entire allocations in the 2016 budget to the Ministries of Roads and Highways, Trade and Industry, Food and Agriculture, Water Resources, Works and Housing, Youth and Sports, and Ministry of Transport amounted to a total of GH¢2.1 billion.

“Interest payments in 2016 (GH¢10.5 billion) would be five times what was allocated to these six key ministries combined.

He said, “As interest payments go up, the space for development shrinks, and this is all due to financial indiscipline. At the end of 2008, Ghana’s total interest payments amounted to GH¢680 million.” he said.

He said this is because low interest payments allow room for more capital expenditure.

“How can an economy be on an upward growth path when interest payments exceed infrastructure expenditure? This is the result of NDC’s economic mismanagement,” he asked.