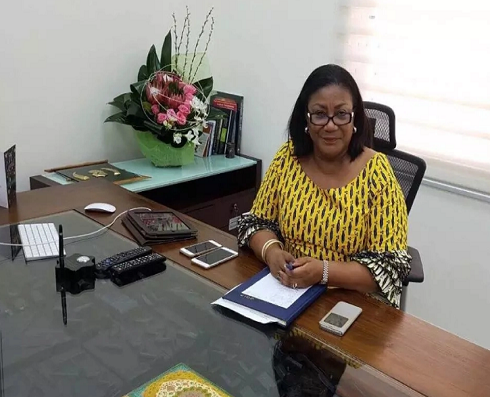 Here are 7 facts you need to know about the First Lady.

Mrs Akufo-Addo was born Rebecca Naa Okaikor in 1951 to Jacob Hackenburg Griffiths-Randolph and Frances Philipina ( (née Mann) as the third of seven children.

Her father, Griffith-Randolph, served as Ghana's Speaker of Parliament during the Third Republic with Dr Hilla Limann as president.

The First Lady's mother who hailed from Ningo was of German descent.

Auntie Becky had her basic education at the Achimota Primary School before proceeding to the to the Wesley Grammar School in Accra for her secondary education.

She later enrolled at the Government Secretarial School where she qualified as a professional secretary.

Having qualified as a secretary, Mrs Akufo-Addo got employed by the Merchant Bank where she worked for sometime before relocating to the United Kingdom (UK).

While in the UK, she qualified as a legal secretary and got worked at two different reputable places, Clifford Chance and Ashurst Morris Crisp, both multinational firms

Auntie Becky and President Akufo-Addo have been married for over 20 years. Actually, April 13 would mark their 21st anniversary.

The First Lady is known to be a philanthropist through her Rebecca Akufo-Addo Foundation which focuses on child health and education.

She recently opened a GHC 10 million Mother and Baby's Unit (MBU) at the Komfo Anokye Teaching Hospital (KATH) after she personally led efforts to raise funds for the project last year.

Apart from her own foundation, the First Lady also serves as the patron of Infanta Malaria, a charity dedicated to the prevention of Malaria in children.

Mrs Akufo-Addo whiles away time by engaging in floristry, interior decoration, and/or reading.

The First Lady likes kenkey and fish. And this should not as a surprise at all, she is Ga for real.

Know someone who is extremely talented and needs recognition?

Your stories and photos are always welcome.