8 feared dead, others injured in a fatal crash near Mankessim 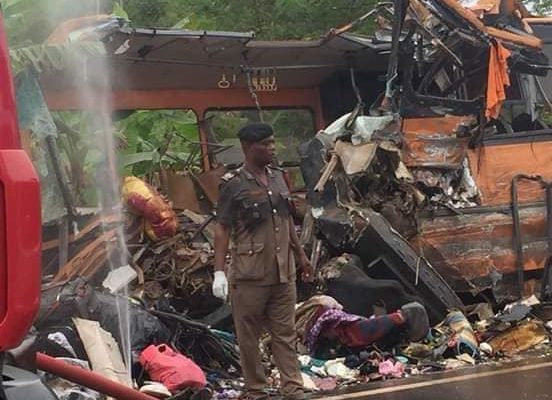 At least eight persons are feared dead and scores injured at Ekumfi-Dunkwa near Mankessim on the Accra-Cape Coast highway in a head-on collision said to have been caused by a failed reckless overtaking Friday morning.

Images and videos from the scene showed bodies lying on the road in blood as parts of the vehicles, particularly the Metro Mass Transit bus involved scattered at the scene. The driver side of the bus was ripped off to the mid-section.

Some survivors had their limbs broken and were groaning in pain.

Three vehicles – a Yutong bus with registration number GN 4368-15, a Metro Mass Transit bus registered AS 2951-10 and an Urvan bus registered GW 9699-18 – were caught up in the accident which has left scores of passengers in critical condition.

Passengers on the Metro Mass Transit Bus are said to have suffered the most in the accident, which is the second to be recorded in the country Friday.

The accident happened at about 11:20am.

The first accident involving two buses left at least 50 persons dead in the wee hours of Friday, near Kintampo in the Bono East Region.

Driver of the Yutong bus which was travelling from Takoradi to Accra was said to be overtaking a saloon car ahead of him when he crashed into the Metro Mass Transit bus that was from Accra to Takoradi, an eyewitness, Leticia Annan told 3news.com

She said the impact of the collision forced the Yutong to turn to the opposite direction and crashed the driver side of the Urvan bus which was directly behind.

“Thanks be to God, no one was hurt in our vehicle,” she said, noting it was only the driver’s side that suffered minor damage.

“The Metro Mass driver is dead and the bus seriously mangled …those in the back of the Yutong bus will be safe but those in the front may not survive,” she added.

It took Police and fire personnel about 10 minutes to arrive at the scene.

“For now they have sent all the casualties to the nearest hospitals. The ambulance has been here twice and the fire service is currently clearing and washing the blood from the road”.