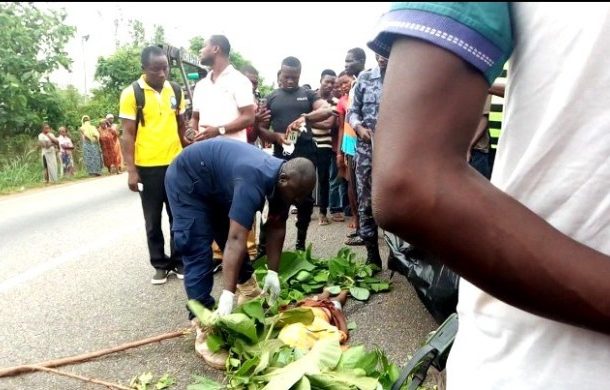 A six-year-old girl died on-the-spot after a being knocked down by a speeding vehicle at Ejura in the Ashanti region.

Police say she was killed while crossing a road with her friend at Timba Nkwanta, a community near Ejura.

A red Toyota Pickup vehicle hit the girls while they were returning from school at about 15.30 GMT on Thursday.

Her body has since been deposited at the Asante-Mampong Government Hospital.

The other victim, aged 9, also survived with serious injuries and is receiving treatment at the hospital.

The police are appealing for witnesses. The victims’ families have been informed of the development.

The victims are pupils of Abuontem M/A Primary School, a community school near Ejura.

Meanwhile, residents who spoke to dailymail expressed shock over the development.

They blamed the police of not doing enough to punish drivers and vehicle owners who ply the road recklessly.

According to data from the National Road Safety Commission (NRSC), deaths caused by road accidents in the Ashanti region has increased by 25 per cent since the beginning of 2018.