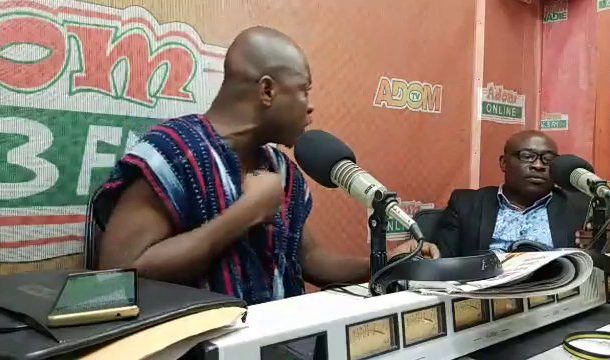 In the studio of Adom FM was nearly turned into a boxing ring when two outspoken communicators of the two leading political parties engaged in war of words.

The NDC communications man accused the Akufo-Addo government of worsening Ghana’s corruption perception index with what he described as the countless corruption allegations leveled against appointees.

Kwaku Boahen said was convinced the only way to curb the menace is to bring back the NDC in the 2020 general elections.

Abronye DC who did not take kindly to Mr. Boahen’s choice of words against his government accused him [Boahen] of being corrupt.


He alleged that Kwaku Boahen, over the weekend, was given GH₵150,000 at a meeting to defend embattled former Chief Executive of COCOBOD, Stephen Opuni.

The NPP man claimed Kwaku Boahen together with other NDC communicators have been tasked to defend Mr. Opuni who is set to face trial over some deals during his time as CEO of COCOBOD.

In defense, Kwaku Boahen descended heavily on Abronye which ended up in a heated argument with the two gentlemen using unprinted words against each other.

Dwaso Nsem host, Captain Smart, had to end the show abruptly since both Abronye and Kwaku were not ready to stop the vitriolic attacks on each other.

After about five minutes, tempers cooled down and they rendered an unqualified apology to listeners for their behaviours displayed.