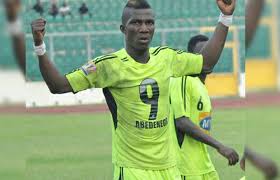 Former Al Hilal Omdurman striker Abednego Tetteh has again warned Asante Kotoko to be careful of the Sudanese club as the two clash in the 5th round of matches in the CAF Confederation Cup.

The former Bechem United forward believes the Sudanese could "cause havoc" in Kumasi judging from how they perform in away matches.

He made a similar call before Kotoko played as guest to the Omdurman side, which the CK Akonnor side eventually lost by 1-0.

He says the Kumasi duel is a "do or die" affair for both teams, who are in contention for a quarter final slot.
Hilal remains the only team in group C to have  grabbed a point in an away match after they drew with Zambia's ZESCO United.

"Al Hilal are really thirsty for the CAF Confederation Cup so they will come into the game to win in Kumasi, " he told Ashhfm.

He revealed how the Sudanese over the years have approached their  games, which seem to be working for them in this years campaign.

"I don't think the players were given winning bonus in their win against Kotoko in their home game because, the management of the team don't give winning bonus when they win by a goal to nil. It happened during my days with the club.

"The management don't like a one goal win in a game,they always want more goals when playing games so it will be do or die playing against Kotoko on Sunday"

Kotoko lost to the Sudanese in the reverse leg at Omdurman by a goal to nill.

They will play host to the group C leaders on Sunday as the porcupines seek to brighten their chances of making it out of the group.
The match which happens to be the last for the Porcupines has been labelled a "make it or break" by the CEO of the club, Mr Goerge Amoako.