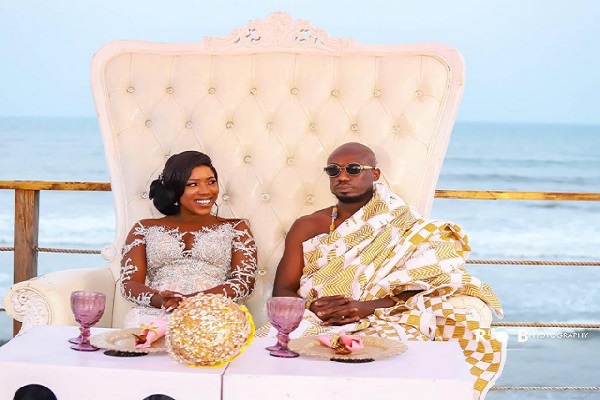 Eugene Osafo-Nkansah with his wife during their wedding

Celebrity blogger Eugene Osafo-Nkansah, widely known as Nkonkonsa has penned down a message to his wife Victoria Lebene Mekpeh, disclosing how “ashamed and disappointed” he is following “everything that has happened in the past few days”.

In the last couple of days, Eugene who doubles as the producer of Peace FM’s Entertainment Review show has been inundated with accusations by showbiz personality Abena Korkor.

Known to be suffering from bipolar disorder, Abena Korkor during one of her hypomanic episodes claimed to have had an affair with Eugene. Although she mentioned that they never had sex, she asseverated that Eugene was good at licking.

A few days afterwards, she apologized to Eugene on WhatsApp for going public. Eugene subsequently showed the apology to his show host who also read it on air.

This irked Abena Korkor as she asserted that Eugene did so to exonerate himself. While promising to expose Eugene, she mentioned that she only apologized to him because she felt she erred in making their affair public, adding that her apology does not in any way suggest Eugene never committed the act.

To prove her case, Abena Korkor released screenshots of interactions she claimed to have had with Eugene where the latter was making advances towards her and expressing his readiness to give her a sexual treat. She also claimed that Eugene at a point mentioned to her that he did not love his wife Lebene, and rather professed love to her [Abena Korkor].

Barely two days after these accusations, Eugene Osarfo Nkansah in a post to commemorate his wedding anniversary said he is ashamed of himself.

So many things were said after our marriage and I am ashamed and disappointed in myself for everything that has happened in the past few days.

I am strong in the midst of all this because of ONLY one person in my life, my powerful wife, VICTORIA LEBENE MEKPAH now MRS. OSAFO-NKANSAH. I was single and wasn’t finding real love. I never knew I would find a permanent place in the heart of one woman but guess what, I chose to marry the forever beautiful Victoria Lebene.

Some said I married a slay queen, some said I like big ass so it will never work and some said I was too broke to marry her. But she came in and changed everything that was said. I stand here today to celebrate a virtuous woman for changing me and every perception surrounding me. What a time to celebrate a wedding anniversary.

I'm facing the biggest public shame ever in my life, But in the midst of the shame, the public ridicule, the insults, the trolls and the judgements, there’s only one woman who has found the courage to stand by me and doing everything as a wife. Today I proudly celebrate you Mrs. Nkansah. If this is not an Angel, then I don't know who she is, if this is not every man's dream then I don't know what men want.

I celebrate you as a symbol of hope that there are still some good, beautiful, hardworking, faithful young woman out there. Please remember my wife in your prayers because she needs it now more than ever. Happy anniversary Victoria, I love you and I always will @victorialebenee . 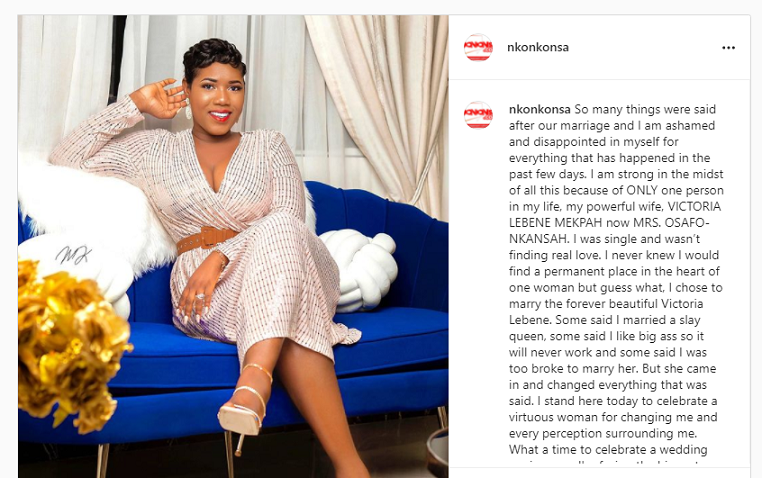