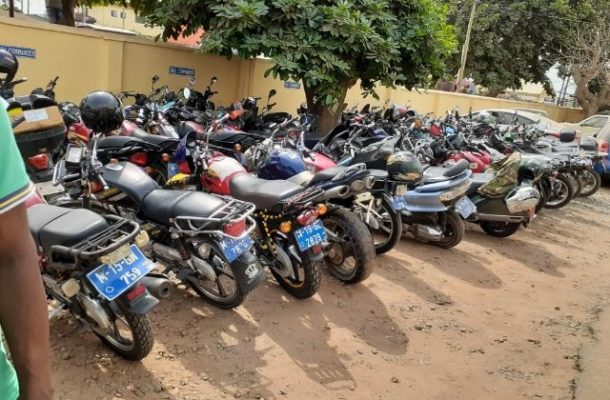 The Dansoman Division of the Ghana Police Service on Sunday embarked on an operation to clamp down on the use of motorcycles for criminal activities within Dansoman and its environs.

In a release, police said the operation started around 6:00 am and drew police personnel from the Dansoman District and the Divisional headquarters led by the Divisional Police Commander, ACP Mr Isaac Asante.

“In the course of the operation, police impounded 105 motorcycles with various offences. The motorcycles are being screened for further action,” police said.

In a similar drive, police on Monday, February 24, 2020, also embarked on Operation Absolute Sanity at the Korle Bu District. Eighty-five motorbikes and 14 tricycles were impounded in that operation.

According to the police, the Korle Bu operation was informed by the rampant report on street robbery, stealing and total disregard for Road Traffic regulations.

“A number of motorists were arrested for varying road traffic offences and other suspected crimes. At the end of the exercise, a total of 99 motorbikes including tricycles were impounded for investigation and prosecution. The exercise will continue unabated to minimise crime activities,” the release from the police stated.

The release added: “Again, on Monday, February 24, 2020, at about 1200 hours, the Baatsonaa Divisional Police Command received information to the effect that a group of unidentified individuals were engaging in narcotic drugs-related activities in an apartment at Baatsonaa, Spintex Road.”

Police said a team of personnel led was quickly dispatched to the scene and they “raided the unaddressed house in question but nobody was found therein.”

However, a search conducted in the room led to the discovery of 119 small sachets and three big sachets of dried leaves suspected to be cannabis Sativa, a narcotics drug, according to police.

“Also discovered were 51 wraps of whitish rocky substances suspected to be narcotic drugs together with a quantity of empty small rubber sachets, 35 packets of ‘rizzler’, three pairs of scissors and three small scales all believed to be items for use in processing narcotic drugs.


“Furthermore, three men's chain necklaces, four wristwatches, 11 unserviceable mobile phones, four laptop computers, and a set of home theatre, all suspected to be stolen properties were discovered. All the exhibits were retained for investigation whilst efforts are underway to track down the suspects being occupants of the said room and bring them to book,” the police stated. Source: myjoyonline.com