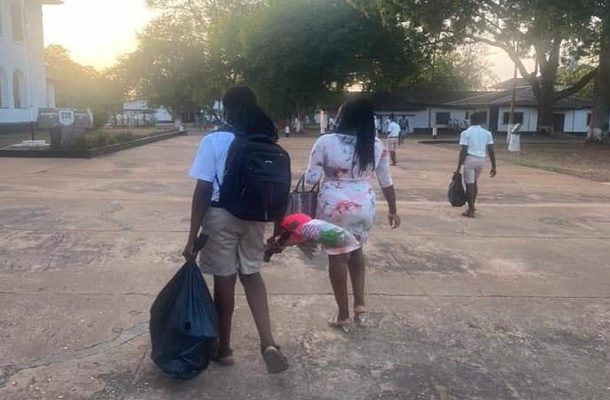 Oheneba Kwaku Nkrabea and her mother at Achimota campus

The Father of one of the Rastafarian students rejected by Achimota School, Ras Nkrabea has disclosed that students were full of joy and cheer when he reported to the school with his son, Oheneba Kwaku Nkrabea, Happy FM reports.

This visit was their first to the school after the Human Rights Division of the Accra High Court ordered Achimota School to admit the two Rastafarian students, Tyron Iras Marhguy and Oheneba Kwaku Nkrabea after they sued the school’s board of Governors, the Minister of Education, Ghana Education Service and the Attorney General to enforce their fundamental Human Rights.

The Nkrabea family took their son to school at the early hours of Thursday June 3, 2021 only to be met by a large crowd of students welcoming them in a cheerful manner. “When we got to the school, they was a large group of students outside and others in the classroom who greeted us with jubilation and cheers. They made a whole lot of noise to welcome us.

Ras Nkrabea shared that he was really pleased with the welcome they received “and it was nice. They were jubilating.” The proud father noted that he already expected the students to act like that because, “the children are very pure in heart and I know they do not share in the sentiments of the school. They have an open heart and I really got what I expected from the students.”

Apart from students, Ras Nkrabea also shared that he was really pleased with the support of the Ghanaian populace. “Ghanaians have supported us a lot throughout this process and I have been overwhelmed,” he told Samuel Eshun on the Happy Morning Show.

He shared that his son, Oheneba Kwaku Nkrabea is enthusiastic about school and is very happy “he is going to pass through Achimota School as a student.”

The concerned father mentioned that he is in support of calls made by a section of the public for the dismissal of the school’s headmistress. “She has not made any apology after the entire incident when an apology could have salvaged the entire thing. We should not keep such an unrepentant person at post.”

Achimota School became the center of debate when it refused to admit two Rastafarian students. This saw a section of the Ghanaian public criticizing the school authorities with others standing with them.

It can be recalled that the GES rescinded its decision to allow Achimota School admit the Rastafarian students and subsequently threw its support to the school for refusing to admit the students.

In recent news, however, the Human Rights Division of the Accra High Court has ordered Achimota School to admit the two Rastafarian students, Tyron Iras Marhguy and Oheneba Kwaku Nkrabea after they sued the school’s board of Governors, the Minister of Education, Ghana Education Service and the Attorney General to enforce their fundamental Human Rights.

After the ruling was made, the school’s Board of Governors have also directed its lawyers to appeal it saying, “The court ruled that the religious rights of the two applicants had been violated by the school management as they sought to enforce the time-tested and well known rules of the school. The court further directed the School to admit the two applicants. The School Board disagrees with the ruling of the Court. The School Board has therefore directed its lawyers to appeal against the ruling.” Recently, however, the board has made a u-turn on the appeal.