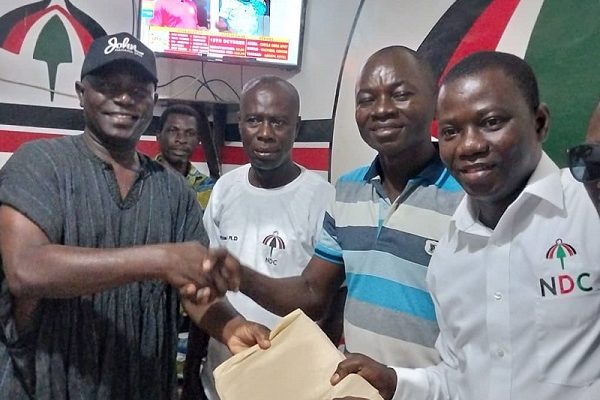 Former National Democratic Congress (NDC) Director of Election for Suhum, Afasi Richard-Zipha, has filed his nomination forms to run for the constituency chairmanship of the party.

He told the media after filing his forms that he was motivated to run for constituency chairmanship because the party's previous executives had failed to win the Suhum parliamentary seat.

He stated that his appointment as constituency chairman will aid the NDC in capturing the Suhum parliamentary seat from the NPP.

"From 2004 to 2020, our previous chairmen have aided the party, but the ultimate goal has been to win a parliamentary seat, which they have failed to do. This necessitates the appointment of a strong chairman, and I believe I am the only candidate who can win the seat for the NDC," he stated.

He went on, "I have worked at the grassroots level, I was an agent in 2008, I am the director of elections from 2008 to now, I know what the party people want here, and I will lead accordingly. Suhum belongs to the NDC, not the NPP, so we must rekindle the branch levels, mount appropriate strategies, and ensure that branch executives understand the party's policies."

He continued, "We cannot sit in offices and fold our arms and expect to win; we must reach out to the grassroots. The NDC held the Suhum seat from 1992 to 2000."

Outlining some of his visions for running for the position, he stated that he will implement branch executive welfare and enroll all branch executives in the National Health Insurance Scheme.

He stated that he would ensure the effective payment of membership dues as well as implement IGF modules to mobilize funds for the party's smooth operation.

He pledged to work with the women's wing to empower our women through skill development and financial management.

He stated that he would advocate for opportunities for branch executives and members, as well as rebrand the party to attract grassroots support.

Concerning youth, he promised to implement mentorship and capacity-building programs across all branches.

He also stated that he would ensure that party agents are mostly chosen from branch executives who can man and protect the party's votes without interference from other parties.