AFCON U-20: Ghana to face Uganda in finals on Saturday 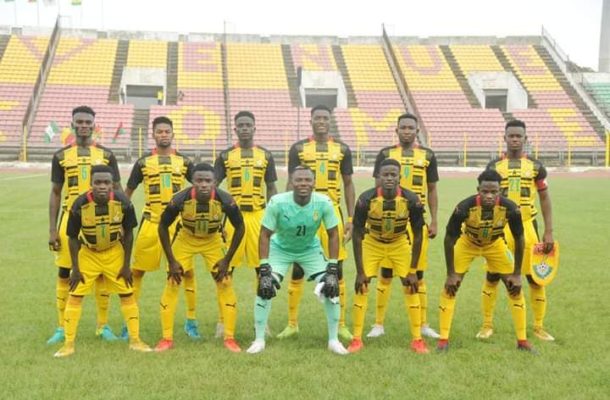 The Black Satellites of Ghana will face Uganda in the final match of the 2021 Africa U20 Cup of Nations scheduled for Saturday, March 6 at the Stade Olympique de Nouakchott.

Uganda were 4-1 winners over Tunisia in their semi-final game which was played on Monday evening, booking a place n the final match.

Derrick Kazaaoka was a hat trick hero for the Ugandans in Monday's game taking his goal tally to five, two ahead of Ghana's Percious Boah who is on three goals

The Dreams FC forward curled in one of his trade Mark free kicks in after Mohammed Sulemana was brought down just infront of the Gambian penalty box for the only goal of the game.

Coach Karim Zito’s side maintained dominance in the first half and Fatawu Issahaku could have doubled the tally for Ghana if his 40th minute strike had go in.

The Gambians returned after the break with some verve as they piled pressure on the Black Satellites to find the equalizer.

On the 52nd minute, Danlad Ibrahim pulled a fine save to deny the Young Scorpions a clear opportunity.

Coach Zito brought Frank Boateng and Matthew Anim Cudjoe to boost Ghana’s attack and the duo quickly made their impact felt in the game when the Black Satellites came close to finding the net but Boah failed to pass early enough to Fatawu who was on the run.

Boah was substituted with barely 10 minutes to end the game as Joselpho Barnes came on to lead the Ghanaian attack.

With minutes to the end of the game, the Gambians pushed further to get the equalizer but a resilient performance by the Ghanaian backline ensured that the game ended 1-0.

For Ghana, this will be the sixth appearance at the final of the U20 AFCON while Uganda will be making their debut at the grand finale of this competition.
Ghana have won the competition on three occasions, 1993, 1999 and 2009.