Agyemang Badu celebrated for lifting the image of his hometown 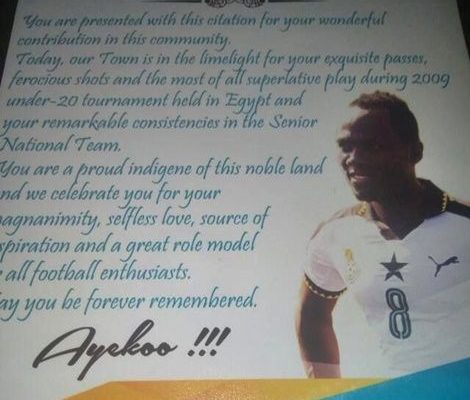 Emmanuel Agymang Badu has been appreciated in Seikwa his hometown in the Brong Ahafo Region for his contribution and dedication to the community.

The Black Stars and Bursaspor midfielder was granted the honour for lifting the image of the community through his hard work on the field.

Agyemang Badu has always taken pride in his hometown and was been praised for the consistency in shifting the international spotlight onto his town.

The occasion which was the first of its kind in the community saw the leaders of the town presenting a citation to their beloved son who has made the community proud.

“Today, our town is in the limelight for your exquisite passes, ferocious shots and the most of all, your superlative play during the 2009 U-20 tournament held in Egypt, and your remarkable consistency in the senior national team,” the citation read.

Badu started his football dreams in Seikwa before making a move to Berekum Arsenal where he rose to  excellence compelling Kumasi Asante Kotoko to go for him.

Immediately after joining Kotoko, Badu had trials in England with Middlesbrough in August 2008 and at Wolverhampton Wanderers three months later.

Badu then signed on 16 April 2009 a six months loan contract with Recreativo de Huelva, on loan from Berlin FC.

On 28 January 2010, Badu joined Serie A side Udinese on a permanent deal from Berlin FC and had been consistent for the side until moving to Bursaspor on loan earlier this year.

Badu has represented Ghana at U20, U23 and senior levels, scoring the last penalty in the 2009 U20 World Cup final against Brazil to make Ghana the first African country to lift the trophy.

Badu won silver with the Black Stars at the 2010 and 2015 Afcons and was also a member of Ghana’s squad for the 2014 World Cup staged in Brazil.