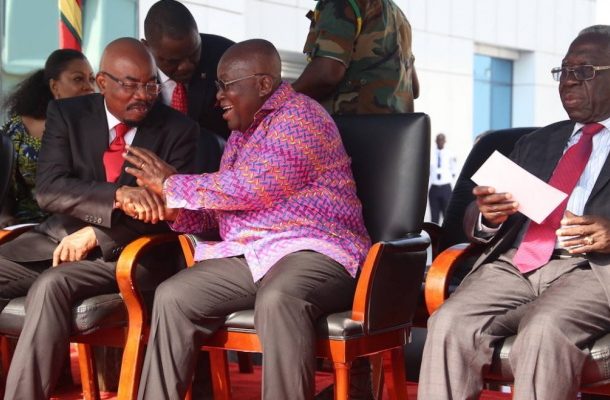 President Nana Addo Dankwa Akufo-Addo has applauded the contribution of Zenith Bank to the deepening of financial inter-mediation in the country.Describing Zenith Bank as “a pan-African Bank”, which is operating in several places on the continent, and in ECOWAS region, President Akufo-Addo stated that “these are the institutions, with encouragement and support, that are going to bring our continent together, and bring us that integrated, united West Africa and Africa, that, I believe, is the platform for the future prosperity of our people”.The President made this known on Monday, 4th December, 2017, when he commissioned the new headquarters of Zenith Bank, at Ridge, in Accra.Explaining the rationale for his presence at the ceremony, President Akufo-Addo stated that “what is going on here [at Zenith Bank] ticks of so many boxes that are important to me, and I thought I should come here and show my solidarity with what is going on here.”The President noted that, in the example of Mr Jim Ovia, founder of Zenith Bank, “We have, first of all, the example of a dynamic entrepreneur, who has built this company, which has gone global. It is in South Africa, England, China, and several places in Africa.”He continued, “The initiative and sense of risk-taking and entrepreneurship that Zenith Bank represents is what, I believe, will drive our country and our continent forward. We need many more Jim Ovias. The more the merrier.”President Akufo-Addo also congratulated Zenith Bank for “paying attention to such an important, other aspect of our development, that is the education of our young people. This scholarship to Ashesi University is a tremendous initiative, and I applaud him very much for it.”The President assured the bank of Government’s maximum support, and wished all those associated with Zenith Bank the best of luck in the coming years.Source: ClassFMonline.com