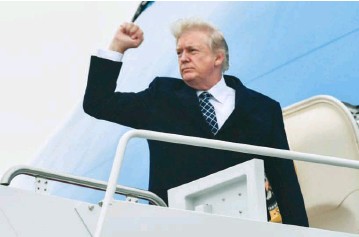 US President Donald Trump on Thursday reportedly demanded to know why the US should accept immigrants from “shithole countries” rather than – for instance – wealthy and overwhelmingly white Norway.

Ghana President Nana Addo Dankwa Akufo-Addo and his predecessor John Mahama are leading the global campaign against Donald Trump as racism allegations stacked up against the American leader at home and abroad after he apparently derided “shithole countries” - referring to Africans.

The two Ghanaian leaders are leading the way as global and internal pressure mounts on Trump over the comments he made while referring to African countries during a meeting on immigration reform, prompting condemnation around the world.

Ghana’s president called the purported comments unacceptable while the man he defeated at the polls last year also waded in with another strong condemnation to establish the West African country as leaders in the pressure.

Ghana is known for its leading role in historic for the emancipation and independence of African countries from their colonial and they are not letting slip over their role in modern racism by the American leader Trump.

Now other countries have joined the campaign with Namibia, whose name Trump had difficulty pronouncing last year, said the remarks had “no place in diplomatic discourse”.

The New York Times and The New Yorker magazine both directly called Trump a racist, setting out comments and behaviour that they said showed the billionaire property developerturnedpolitician had an openly “bigoted worldview”.

But in an editorial unlikely to help extinguish the latest firestorm in the White House, a US publication for white supremacists gave Trump its backing.

The Daily Stormer said the reported comments were “encouraging and refreshing, as it indicates Trump is more or less on the same page as us with regards to race and immigration”.

Trump tweeted a lukewarm denial early on Friday, maintaining that he used “tough words” but not those reported at the previous day’s White House meeting with Republican and Democratic party lawmakers.

He reportedly demanded to know why the United States should accept immigrants from “shithole countries”, after lawmakers raised the issue of protections for immigrants from Africa, Haiti and El Salvador.

The intervention of Ghana and Namibia followed a similar tone to strongly worded comments from the African Union and African ambassadors to the United Nations that called the reported remarks xenophobic and racist.

Ghana’s President Nana Akufo- Addo said the reported language was “extremely unfortunate”, adding: “We are certainly not ‘a shithole country’.”

“We will not accept such insults, even from a leader of a friendly country, no matter how powerful.”

John Dramani Mahama, whom he defeated just a month after Trump’s own victory against Hillary Clinton at the polls in November 2016, went further.

“Isn’t Trump demonstrating that he’s nothing but a racist and pursuing a policy of ‘Make America White Again’?” he asked on Twitter.

Ghana has close ties to the United States and in 2009, Trump’s predecessor, Barack Obama, chose Accra to deliver a speech setting out his foreign policy goals for the continent.

In the speech, he said he saw Africa “as a fundamental part of our interconnected world”, where Africans were “partners with America on behalf of the future we want for all of our children”.

Namibia’s foreign ministry meanwhile said Trump’s language was “contrary to the norms of civility and human progress” and ignored Africans’ contributions in the United States. “The USA we know is one that was built with blood and sweat of African slaves and immigrants from all over,” it said in a statement.

Caricom “is deeply disturbed by reports about the use of derogatory and repulsive language by the President of the United States in respect of our member state, Haiti, and other developing countries,” the bloc’s Guyana-based headquarters said in a statement.

Thursday’s immigration meeting had been designed to cut a bipartisan deal to limit immigrants from bringing family members into the United States, restrict the green card visa lottery and boost border security. In exchange, hundreds of thousands of young people known as “Dreamers” would be spared deportation.

Democratic Senator Dick Durbin, who was present at the meeting, rejected Trump’s denial about the language he used, saying he repeated it and said “things which were hate- filled, vile and racist” on several occasions.

The New York Timessaid in an editorial that the comments had shown up as “a charade” indications that Trump would soften his hardline stance on immigration.

During the election campaign, Trump had called Mexicans “rapists” while in recent months he has used a racial slur at a reception for Native American veterans, said all Haitians have Aids and Nigerians live in huts.

He has also questioned the loyalty of Muslim immigrants and claimed Obama was not born in the United States.

“We have to show the world that this president does not represent the feelings of most of the American people,” they said.