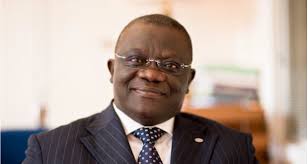 The Ghana Amalgamated Trust has today appointed as its Chairman, Albert Essien as well as its Investment Banker.

Mr Essien was appointed alongside Eric Nana Otoo, who comes in as the Managing Director.

Mr Essien is expected to serve as the Chairman, coming on board with his 30 years experiennce in the field of banking.

Prior to this appointment, he had earlier served as the the Group Chie Executive Officer of Ecobank Transnational Incorporated (ETI) in 2015.

Mr. Essien is an honorary fellow of the Chartered Institute of Bankers, Ghana, and holds a B.A. (Honors) in Economics from the University of Ghana.

He is an alumnus of the Executive Development Program of the prestigious INSEAD (France/Singapore) and a World Fellow of the Duke of Edinburgh Award.

Mr. Essien serves as an Independent Non-Executive Director at Old Mutual Ltd., South Africa.
He is expected to work together with Mr Eric Nana Otoo who is also an expert in investment banking, consulting and private equity.

He has worked with Goldman Sachs, Mckinsey and Duet.

His experience in Finance was honed at Goldman Sachs & Co.’s New York City office from 2007, where his responsibilities included coordinating and managing origination, valuation, acquisition and due diligence for investment transactions.

In 2006 and later between 2010 and 2013, he worked as a strategy consultant at McKinsey’s New York City office, where he worked with senior executives and boards across different industries on various strategic, finance and operational issues.

His work involved transformation programs at some of the major US banks and the broader financial services sector.

He was recently a Director at Duet Private Equity where he managed companies in the firm’s investment portfolio with additional duties including finding new investment opportunities. He worked closely with senior management of the portfolio companies to develop and implement strategies and improve business performance.

Mr. Otoo attended Grinnell College in the US, for his undergraduate studies where he received majors in Economics and Computer Science with Phi Beta Kappa honors.