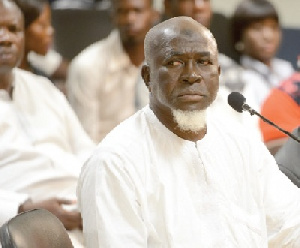 Owner and bankroller of King Faisal, Alhaji Karim Grunsah says he has decided to drop out of the 2019 Ghana Football Association Presidential race based on the advice of his family members.

According to the outspoken football administrator, he will channel his energies in helping Ghana football in a different capacity and not as the President of the Association.

Speaking on Accra based Asempa FM on Wednesday, September 11, 2019, Grunsah said the decision was not forced on him.

“I have withdrawn from the GFA presidential race, I will no longer contest for the position. My family both home and abroad spoke to me and cited different examples of how I can be of service to this country aside being the President and at the end of the day, they made sense to me so I have agreed not to contest. However, I will try and contest for a position on the Executive Council'', he said on Asempa FM.

Until today, Alhaji Grunsah was one of several football administrators who has publicly expressed interest in succeeding Kwesi Nyantakyi who left the position in 2018 following his role in the Number 12 documentary released by Anas Aremeyaw Anas.

The remaining major contenders for the position are former Vice Presidents of the GFA, George Afriyie and Fred Pappoe, as well as Kurt Okraku, Wilfred Kweku Osei Palmer and Nana Yaw Amponsah.

Unconfirmed reports suggest the elections will be held on October 27.
120 members of Congress, representing various clubs, welfare bodies and constituent bodies will vote to elect a new FA President and his Executive Council members when the time comes.