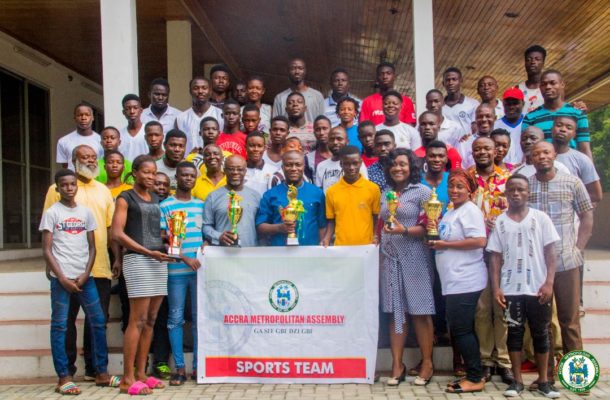 The Accra Metropolitan Assembly's (AMA) sports team have been crowned overall champions at the just-ended Inter-Districts Sports Festival which took place at the El-Wak Sports Stadium in Accra.

Presenting the trophy to the mayor of Accra, Mohammed Nii Adjei Sowah, Director of Sports at the AMA, Mr Twumasi Barimah said the AMA's team won four out of the total six disciplines they participated in.

Nii Adjei Sowah, who received the team, congratulated them on their victory and promised to support them to win more trophies for the city.

“Sports is very important for us, it boosts our health and also an opportunity to generate employment... Every effort in reviving sports should be supported and that is why I'm very interested in making sure that we revive sports,” he said.

He urged young people to partake in sports, especially the lesser-known ones as it could offer them opportunities.

“This is Accra, this is where football is grown. We have a lot of football parks around where we go to play but they are now fewer in Accra and we have to look at it again but on the flip side, people are now constructing Astro turfs, so, it’s not like it has died. We should start preparing for next year and possibly start an intra-districts [game] to showcase what we have,” he stressed.