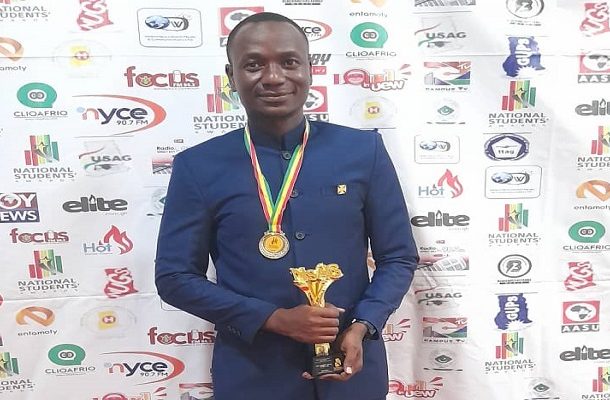 The District Chief Executive (DCE) of Amansie South in the Ashanti Region, Clement Opoku Gyamfi has been adjudged the most outstanding DCE at this year's National Students Awards.

Aside from the DCE, Minister of Trade and Industry, Alan Kwadjo Kyeremanteng and other individuals were honored at the event aimed at recognizing their impacts on society.

Clement Gyamfi popularly known as "CID" expressed his joy in winning the award two consecutive times and has promised to do more.

"I'm so excited for receiving the award for the second time in a roll. It's a great feeling to know they've recognized my effort in redevelopment in the education sector and honoring me as the Most Outstanding DCE," he said.

According to him, he was not surprised to have won the award for the second time, considering the kind of work he has done for the District in the education sector.

"We spent much of the Common Fund on education, building schools, manufacturing desk, and we are also trying to develop the human capacity in terms of education, running training programs for teachers, encouraging students by buying some items to support education like a pen, pencils, exercise books and others

"I wasn't surprised when they nominated me but what I can say is that am much grateful. Just about two days ago, I commissioned a KG block and the commissioning keeps coming so am happy and I give all the praise to God and the technocrats at the assembly and the assembly members because they have also done a marvelous job,"said Clement Gyamfi.

He added, "I will reiterate that the vision is to make sure Amansie South produces enough graduates and scholars. The Amansie South has been tagged as an area with less infrastructural development but the status quo must change. We are focusing on developing the human capacity first".

The National Students Awards is an award scheme that recognizes students, associations, corporate institutions and individuals across the country.