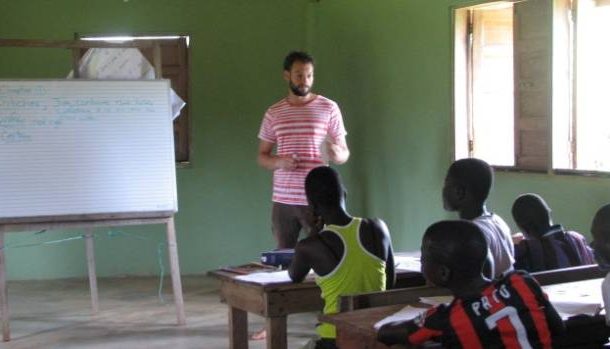 The author and his students.

I left for Ghana shortly after my thirtieth birthday. I was living in New York, and in the months leading up to my departure, the New York Times assured me that I was heading to instant death. Ebola plagued the headlines of all papers, and was the topic of hushed conversation in every coffee shop and bar.

The language surrounding the epidemic was mostly (I think) fear mongering, and the articles were unspecific and rambled on with a sort of frustrating vagueness. It was exhausting. It didn't seem to matter that New York had more Ebola cases than Ghana. West Africa had been all lumped into one big Ebola stricken corner of the world, and I was told by friends and colleagues, half-jokingly, to please not come back with the disease.

I promised I would not, then I got on a plane, and left my comfortable apartment in Manhattan's West Village, for eight months in deepest darkest Africa.

I arrived on Anzac Day. It was the most bizarre thing to be racing through the packed streets of Accra, to Kaneshi market, while some old kiwi bloke rattled on about Anzac history on the BBC radio channel.

Then began the ten hour slog along the coast.

I had been assigned the role of Assistant Director of Trinity Yard School (TYS), in the Western region of Ghana. TYS, a Non-Government Organisation (NGO) based out of Vermont, is aimed at serving the youth of Cape Three Points, and the surrounding rural areas where access to educational opportunities is severely limited.

And rural it was. I took about four different tro tro's (beat up old vans, with people crammed into every available spot) to get to the "Yard", where I now live. It's a beautiful plot of land, with an excellent left hand point break on its doorstep, but it's a hell of a mission to get to.

As we drove from Accra to Takoradi, then onto Agona and Akwidaa, the cities became towns, then the towns became villages. When we reached Akwidaa, where about half my students came from, I was glued to the window of the tro. 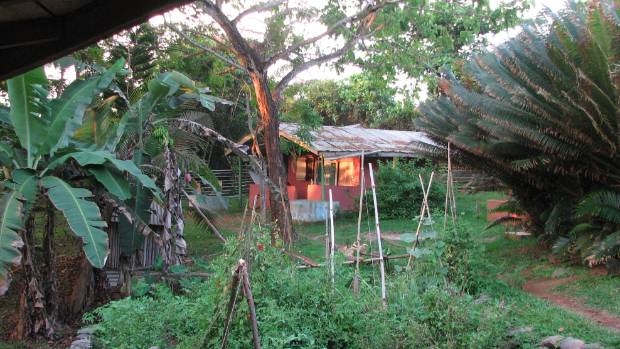 
I had seen this stock village scene so many times before, but I had never gotten this close. They were the villages I'd seen in the pages of National Geographic magazines. I half expected to see an older white gentleman in khaki shorts walk towards the camera, pleading viewers for a dollar a day.

Chickens, goats and kids ran across the dirt road. The houses were basic mud huts with thatched palm roofing. Dogs, with drooping teats from years of countless litters, skittered from our path.

Little kids ran after us yelling "Obruni! Obruni!" (White person) when they saw me. It would become such a strange thought, when I eventually got to know my students, when I remembered that they actually lived here.

They had sneakers, phones, and cool hairstyles. They had crushes and fought and laughed. I joked with them, and reprimanded them for talking in class.

They were just like any other students I had taught before. But many of them slept on the dirt floor. Many of them went without food for the day. Many of them had lost siblings or a parent to disease. A few of the girls had already had babies. 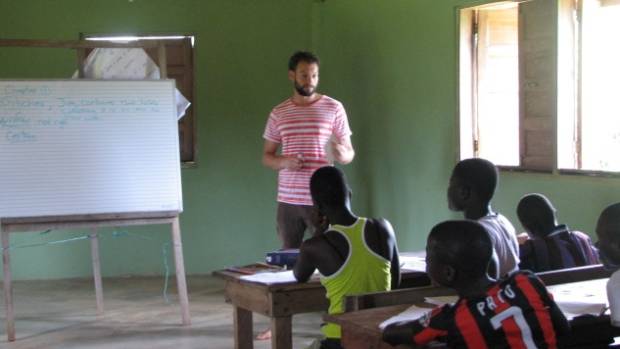 IN CLASS: The author and his students.


One student wrote: "I always stay at my friend's house, because I don't have a home." Another one wrote, "I wash my shirt every day, because it is the only shirt I have." I read these sentences that were small windows into their lives, and realised I was wrong. They were not like any of the students I had taught before at all.

The students range from fifteen to twenty, and none have been to high school. When I ask them what they see for themselves following graduation of the two year program here at TYS, most want to attend high school or enter an apprenticeship, and almost every single one of them just wants to get out of the village.

My first foray into the village of Cape Three Points came shortly after I arrived. It was a twenty minute walk down the beach, then a jungle bushwhack and swamp crossing, before I reached it.

My students lived among the malnourished infants with pot bellies, the scrawny goats and the millions of dogs picking at rubbish piles (the litter situation here is insane, not tidy kiwis at all.)

Small boys chewed Styrofoam. Exhausted women fanned themselves in the shade. Men prepared the waka-like boats for an evening of fishing. There was a sense that simply surviving was enough. It made me realise how important an institution like TYS is here, and what a service we were offering.

Firstly, that we provide a fee-free secondary education, but secondly, that we help these students plan for their futures. Through individual counselling and assisting in the placement and funding in senior high schools, vocational institutions, and apprenticeship programs of their choice, we help them towards a more positive life path. 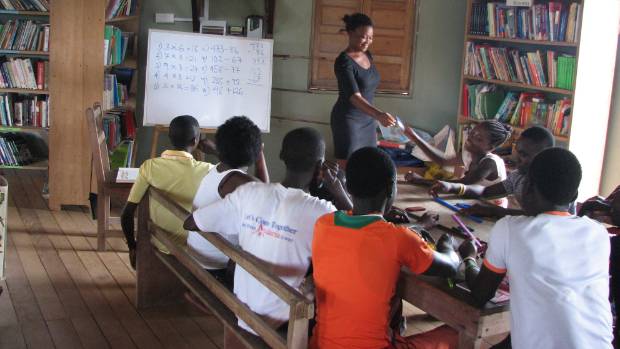 
I went to Muritai School in Eastbourne, Wellington. I'd wait out on the deck of my house to see the bus coming around Point Howard, before sprinting down the hill to the bus stop to catch it just in time.

My Mum made my lunch. We had school trips and had the luxury of fish n chip Fridays. High school was simply a bus ride in the other direction. The decision to attend University was made arbitrarily, and I took it all for granted. How safe, and easy the whole process was. How lucky I was to have the option to go to school at all.

My students wake up every day at 5am to do their chores and look after their siblings. They walk over an hour to get to school, either under the harsh sun, or through a torrential downpour. My colleague, a tough Ghanaian girl from the Volta Region, laughed when I sympathised with them. "This? It's nothing! I had to walk for over two hours to get to school, and I had to bring my own chair!" 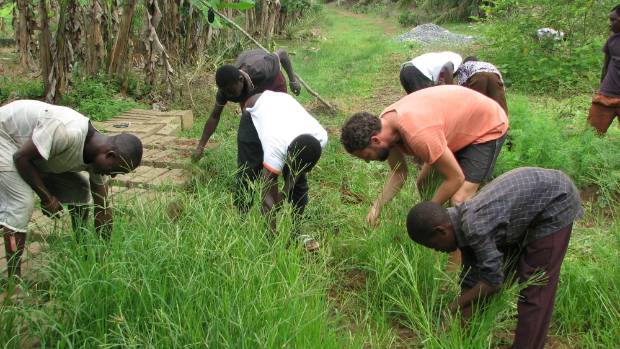 BACK TO NATURE: Learning about sustainable agriculture.


At TYS, there is a focus on English and Reading Comprehension, and Math, but we also hold classes on geography, social studies, science, ICT and general arts. Every Wednesday is "green day" when we teach sustainable agriculture. The day before green day, we remind our students to bring their cutlasses (machetes that every student seems to have owned since they started walking,) and green day is spent weeding, planting, tending to their individual vegetable plots and beach clean ups.

Every afternoon, the students practice traditional Kente Weaving, a complex system of weaving on a loom with foot pedals. As I chart my students' breakthroughs, and after seeing what trials they endure every day, I can honestly say that it is the most rewarding work I have ever done in my life.

It is a life far different from my life in New Zealand or New York. I live in a small hut in the bush and hardly see other Obruni's.

The stretch of coast is wild and isolated, without another man-made structure in sight. It is the most religious country in the world (fact), but there is also a firm belief in voodoo or "juju." In fact, my favorite cove where I go to swim and read is haunted by spirits and no one ever goes there, apart from me I guess.

We had a conversation the other day, about "people who aren't really people". Apparently, if you see an incredibly beautiful woman walking down the street, she is most probably from the sea, a mermaid, and that you should not, at all costs, receive gifts from her or attempt to hook up with her. One of my colleagues had a friend who made the mistake of pursuing such a non-person, and he has been cursed ever since. Some of their friends have third eyes so they can see these non-people, but most of us are in the dark about it. 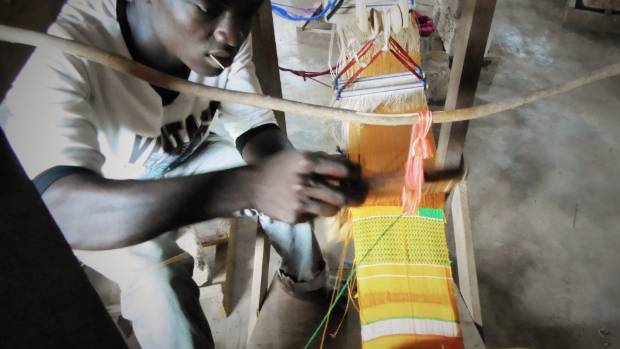 KENTE WEAVING: A complex system of weaving on a loom with foot pedals.


There are other challenges and differences. If I want a beer for example, it's a twenty-minute jungle bushwhack followed by another ten minutes along the beach, to a small eco lodge that sits between us and Cape Three Points. I have gotten used to eating Banku and Fufu, a sort of fermented dough, and have leant to bite my tongue at the difference in beliefs such as the prolific sexism, extreme religion and the rampant homophobia (it's actually still illegal here.)

As far as Ebola goes, it's the least of my worries. There are snakes, scorpions and spiders to worry about. I'm probably going to get malaria at some stage too, but we have the meds here just in case. Everyone has had it, and apparently it's no big deal. One student gave me some salient advice on how to avoid contracting Ebola. "Sir, don't be licking the bleeding fruit bats." I thanked him and told him I would try to remember that if the situation happened to arise.

It is different here. There are different beliefs, different foods, and different things to worry about.

There is weather to adapt to, new animals to watch out for, living conditions to adjust to and behaviour to modify. Funerals are joyous, drunken celebrations no matter the nature of the death or the age of the deceased.

There are Blair Witch Project packages tied to trees. We hunt and eat endangered turtles. We take showers from buckets and use composting toilets. We catch fish and eat from the garden.

Things are different here, but one thing that is not, is the need for quality education and support.

TYS is funded solely from donations. Students are provided with meals, two years of free education and their continued education is largely financed. Help the student's get bikes. Follow the TYS blog.