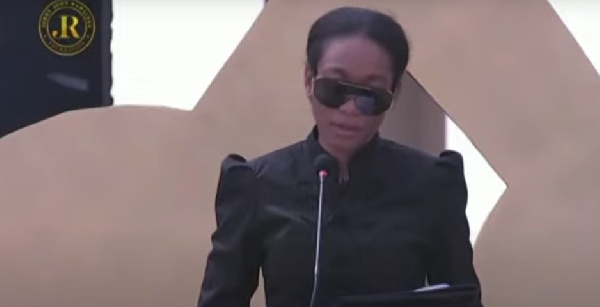 She was then joined on the dais by her sister Zanetor to enable her complete the reading of the tribute.

“With your help and support we were able to fight for the rights of women,” she said in the tribute among other things, on behalf of her mother.

The biography of the late Flt Lt Jerry John Rawlins which was read by one Eric Gbeho during the final funeral ceremony at the Black Stars Square in Accra, revealed that the late former President worked to bring governance close to the people.

“Jerry Rawlings brought governance to the people,” Gbeho said, among other things.

He added, “He encouraged citizens to participate in local governance.”

The final funeral ceremony was attended by several dignitaries.

Today, Wednesday, January 27 marks the final for the ceremony of the late former Ghanaian leader.

The 4-day funeral ceremony started Sunday, January 24 which a requiem mass service held for him.

Scores of dignitaries including President Nana Addo Dankwa Akufo-Addo, Vice President Dr Mahamudu Bawumia, Former Presidents John Dramani Mahama and John Agyekum Kufuor all filed past the body which was laid in state at the Accra International Conference on Monday and Tuesday.

The final ceremony is being held at the Black Stars Square.