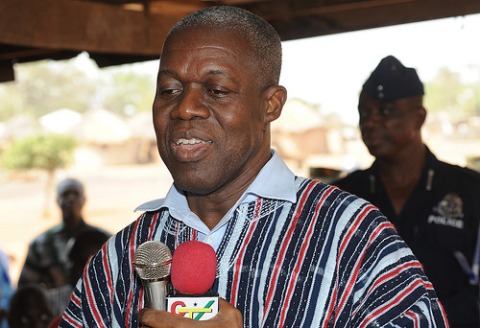 Former Vice President of Ghana, Paa Kwesi Bekoe Amissah-Arthur, has stormed the Ashanti region to observe the National Democratic Congress' (NDC) ongoing Branch elections in a bid to keep in touch with the party's grassroots.

The Former Governor of Bank of Ghana who visited the Kwame Adu Branch, Breku Branch, Kwame Agyei, Broni krom, and the Tonkwase 1& 2 Branches all in the New Edubease constituency in the Ashanti Region urged members of the party to work hard in order to recapture political power in the next General Elections..

The New Edubease constituency has been dominated by the NDC since 1992 but strangely lost to the New Patriotic Party (NPP) in the 2016 elections.

According to the former Veep, the Branch Executives holds the key to the party’s victory and the need for them to liaise with all Party people in the spirit of respect, unity and love.

Both Alex Ackon and Yaw Boateng Gyan called for the new and old executives to team up and work diligently by preaching the achievements and ideals of the party in anticipation of winning more members to the fold.

They called on the electorates to expose the lies of the NPP government and stay vigilant till victory is assured on December 7 2020.

The former Vice President was also active when his party opened registration when he visited areas in the Eastern region is expected to visit other branches in the Central and other regions.