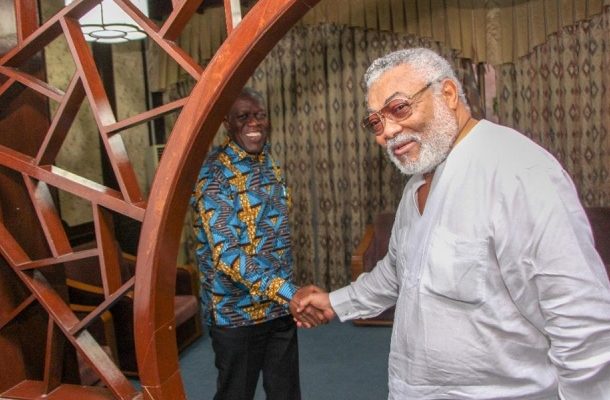 Former President Jerry John Rawlings has paid a glowing tribute to the late former Vice-President Paa Kwesi Bekoe Amissah-Arthur, describing him as a “ Ghana's unsung hero”.Mr Rawlings said, as an economist, Mr Amissah-Arthur exercised his duties with dignity and a good sense of humility.Mr Rawlings, in a tribute, said he realised Mr Amissah-Arthur was not a personality to be regarded lightly when, in his role as a former Deputy Minister of Finance, bailed the PNDC out of a difficult situation.Mr Rawlings described the late vice-president’s death as a shock and prayed for his soul.Mr Amissah-Arthur, will be buried today, Friday, 27 July 2018 at the Military Cemetery, Accra.He was, on Thursday, 26 July 2018, laid in state at the foyer of the Accra International Conference Centre (AICC) where former ministers of state in the John Mahama administration, politicians from Mr Amissah-Arthur’s party, the National Democratic Congress (NDC), opposition party members, and a government delegation led by Senior Minister Yaw Osafo Marfo, as well as family, friends and the public, filed past his remains to pay their last respects.

The former vice president who served as a Governor of the Bank of Ghana between 2009 to 2012 passed away at age 67 on the  29th of June 2018 at the 37 Military Hospital where he was pronounced dead.

Mr. Amissah-Arthur was reportedly jogging in the gym at the Air Force Gym where he collapsed.

He was the fifth Vice-President of the Fourth Republic and was in office from August 6, 2012, until January 7, 2017, under President John Dramani Mahama.

He also served as the Deputy Secretary for Finance in the PNDC government from February 1986 to March 1993.

From April 1993, he continued as the Deputy Minister for Finance in the under the Fourth Republic’s first government until March 1997.

He was survived by a wife and two children.

Below is Mr Rawlings’ tributeFARE THEE WELL, PAA KWESI AMISSAH ARTHURPaa Kwesi Amissah Arthur worked with both the governments of the Provisional National Defence Council (PNDC) and the National Democratic Congress (NDC) during my tenure.As an economist and academic I knew Paa Kwesi as a true professional who exercised his duties with dignity and a good sense of humility.Typical of many professionals cast in his mould, he let his work speak for itself. He was not one who preferred to stay in the public eye but his association with politics did not allow that.Nevertheless, Paa Kwesi’s calm disposition hid a confident interior that I believe earned him his role in our governments and allowed him to rise in other roles outside government.During a trying period in the PNDC days, our former Deputy Minister of Finance bailed us out of a difficult troop situation in his capacity as Acting Minister. That was when I recognized that he was no personality to be regarded lightly.As a partner in the trenches of the PNDC and early NDC days we had our challenges too and he took them in his stride even if there were some discomforting encounters.His candour could be disarming sometimes and he had a good grasp of the history of the PNDC and NDC days. I remember that once not too long ago he countered a misrepresentation during a tribute session for Louis Casely Hayford in church, correcting some historical facts concerning the PNDC to my pleasant surprise and that of many who were gathered at the service.Despite the complex challenges he encountered as Vice-President, he nevertheless was a man whose demeanour won him deserving respect and admiration.Paa Kwesi may have been an unsung hero, but he paid his full dues to Ghana with love and commitment. His demise during a gym workout came as a shock but the ways of the Good Lord are not for us to question.Fare thee well Paa Kwesi. You were a true son of Ghana.The man Amissah-ArthurAmissah-Arthur was the sixth Vice President of Ghana, in office from 6 August 2012 until 7 January 2017, under President John Dramani Mahama. Previously, he was Governor of the Bank of Ghana from 2009 to 2012.He was sworn in as Vice-President on 6 August 2012, following vetting by Parliament.He was nominated by Former President John Dramani Mahama to be vice president a week after Mahama himself was sworn in.This followed the sudden death of President John Atta Mills on 24 July 2012.Economics and consultancyAmissah-Arthur was a research assistant at the Institute of Statistical, Social and Economic Research between 1974 and 1975. He later joined the Economics Department as a teaching assistant from 1977 to 1978, going on to become an assistant lecturer in 1979.He lectured at the Department of Economics at the University of Ghana between 1980 and 1988. He has also been a lecturer at the Department of Economics, Anambra State College of Education, Awka, Anambra State, Nigeria (August 1981 – July 1983).[7] He went into politics until 1997. He worked as a consultant for the World Bank in The Gambia. He also served as a consultant for the Netherlands' government education project in Ghana. He then worked as Senior Economist for the Sigma One Corporation in Ghana between 1998 and 2000. Between 2001 and 2002, he was on assignment for the Ministry of Foreign Affairs of Denmark.PoliticsFrom 1983 to 1986, Amissah-Arthur served as a special assistant to the Secretary of Finance and Economic Planning, Kwesi Botchwey, in the Provisional National Defence Council government. Subsequently, he was Deputy Secretary for Finance in the PNDC government from February 1986 to March 1993. From April 1993, he continued as the Deputy Minister for Finance in the Rawlings government after the establishment of constitutional rule until March 1997.Amissah-Arthur was appointed as Governor of the Bank of Ghana in October 2009 by President John Atta Mills. He held this position until 6 August 2012, when he became Vice-President of Ghana following the death of Atta Mills.