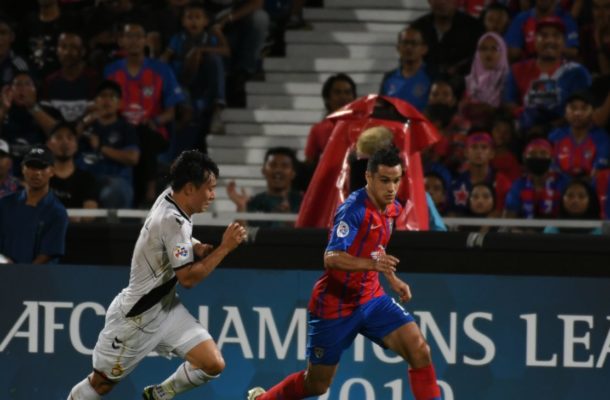 
But it could have been so much better for the Malaysian champions as a combination of bad luck and poor finishing prevented them from taking all three points.

Fans of JDT will have had mixed emotions after the draw with the K League 1 side. There will have been pride at seeing their team perform with passion and flair in their home AFC Champions League debut. However, there will also be frustration at what was a missed opportunity.

If JDT want to progress to the Round of 16, success in the home matches is likely to be important but they failed to make the most of this excellent opportunity for a win. The graphic below demonstrates just how dominant JDT were in an attacking sense, with almost twice as much action coming in the away side’s penalty area as the home side’s.

JDT had 21 efforts on goal, compared to Gyeongnam’s six. Seven of the home sides’ attempts were on target in contrast to just two from the visitors.

But however much the statistics highlight JDT’s dominance in attacking areas, the fact remains that they could only muster one goal and that came from Diogo’s penalty.

Gonzalo Cabrera should certainly have found the net instead of hitting the bar from close-range in the second half, while the Brazilian goalscorer will feel he should have added his second with a late header that also hit the crossbar.

JDT simply must be more ruthless if they are to do more than prove that they can give their opponents a tough game.

Super Safawi does everything but score

Safawi Rasid again demonstrated why he is considered the brightest young talent in Malaysian football. The 22-year-old was a constant threat to JDT’s Korean opponents and he had no hesitation in letting fly with his left foot.

As Safawi’s shooting matrix (below) shows, he had six attempts at goal, with two of them (in green) saved by Gyeongnam goalkeeper Lee Bum-soo and another coming off the post.

Perhaps the best opportunity of all came when he was sent clear on goal in the closing stages. He attempted to take the ball round Lee instead of shooting and was denied by the ‘keeper.

It was a somewhat tired effort by a player that had put so much into the match. Despite his failure to get on the scoresheet, Safawi’s performance will certainly have raised his profile and enhanced his growing reputation.

All-action Diogo delivers from all angles

JDT signed Diogo from Buriram United to make an impact on this stage and he is not disappointing. The 31-year-old netted the Malaysian club’s consolation goal in last week’s defeat at Kashima Antlers and he was on target again in this match as he coolly slotted home the second-half penalty that sealed a point.

But Diogo’s overall performance was another reminder that, while he has an impressive scoring record, he gives much more to the team than goals. His heat map (below) shows just how much of his work was done outside of the penalty area.

We did not only see a goal, a spectacular overhead kick and a header that struck the bar, but we also saw a player working hard all over the pitch to stretch the opposition defence, to create chances and to make space for others.

Brazil legend Ronaldo was watching from the stands and he must have been impressed by the tireless work of his compatriot on the field.