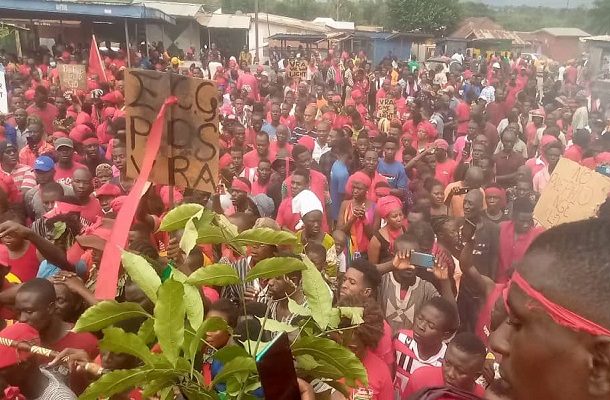 There was anger, bellowing amidst drumming and chanting of war songs in the Yilo and Manya Krobo areas in the eastern part of the Republic of Ghana where on Monday, November 22, 2021, over 7000 residents hit the streets on Monday to protest against the Electricity Company of Ghana (ECG).

The protesters, who were clad in red attire, marched through the principal streets and demanded an immediate cessation of electricity supply from ECG to the areas.

The protesters rather want the country’s largest state power generation company, VRA, to supply electricity to areas, as according to them, ECG has been unfair in dealing with them.

It would be recalled that in 2019, the residents of Yilo and Manya Krobo protested and mounted roadblocks on the main Odumasi-Kpong road after the staff of ECG embarked on a disconnection exercise over the failure of people in the area to settle outstanding electricity bills.

They clashed with the police who were called to intervene, resulting in a shooting incident.

In the process, some residents were wounded with two people losing their lives while others suffered gunshots wounds with female Junior High School student part of the victim had her leg amputated while a footballer has been crippled as a result of the injury.

During his visit to the area in 2019, the then Energy Minister, after meeting the chief and opinion leaders of the area, promised to resolve the issue.

However, the residents said the issue had not been resolved.

The residents claimed that they were promised free electricity during the construction of the Akosombo Dam but they have not been able to prove the claim with documentary evidence, after being challenged by the Volta River Authority (VRA).

In a petition which they intended to submit to the Minister for Energy, the residents, led by the United Krobo Foundation said the youth expressed their opposition to attempts by the ECG to change their postpaid meters to prepaid since their concerns notably the over-billing and shooting incident had not been investigated and victims compensated.

Among their demands are that two renowned people from the Krobo States be represented on the VRA board to channel their grievances, investigations into Resettlement Funds paid by the World Bank and addressing issues of health facility, education and others.

They issued 21 days’ ultimatum for the Ministry of Energy to have their concerns addressed or they would stage more protests in the two Krobo areas.