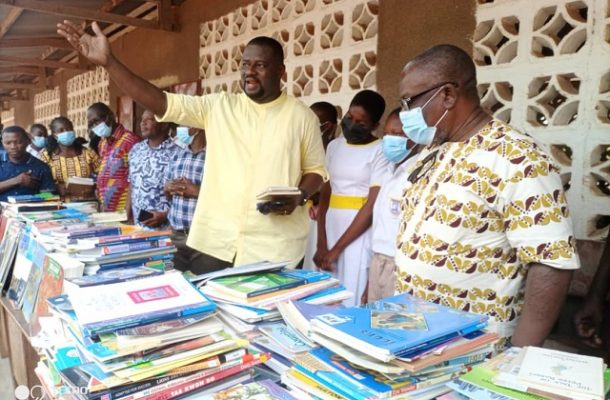 The Majority Chief Whip and Member of Parliament for Nsawam-Adoagyiri, Frank Annoh- Dompreh has reiterated his commitment towards the promotion of quality education in his constituency.

The MP made the pledge at a recent event where library books were distributed to Rev Father Wiggers Basic School, Bishop Ato Basic School and the Adoagyiri Methodist Basic School in the area.

According to him, his ultimate priority is to make education attractive in the constituency and across the nation.

hE explained that the donation of the Library books to the Basic Schools in Nsawam-Adoagyiri stems from an agreement reached between himself and Books To Africa in the United Kingdom under which HE \[MP] spent US$7, 000.00 in the procurement.

The MP disclosed aside from the books, he has also provided 50 ICT Centers in various schools in the constituency to promote ICT learning.

Hon. Annoh-Dompreh urged the teachers, parents, and students in the constituency to double their efforts to make the performance of students the best in the country.

Touching briefly on road construction, Mr. Annoh-Dompreh gave the assurance that roads in various parts of the constituency will be asphalted to about 25 kilometres and beyond as according to him, plans by the Akufo-Addo government are far advanced to carry out the said projects.

On his part, the Nsawam-Adoagyiri Municipal Director of Education, Mr. Samuel Ntow commended Annoh-Dompreh for the donation of the books to the schools and said it will greatly enhance literacy in the Municipality.