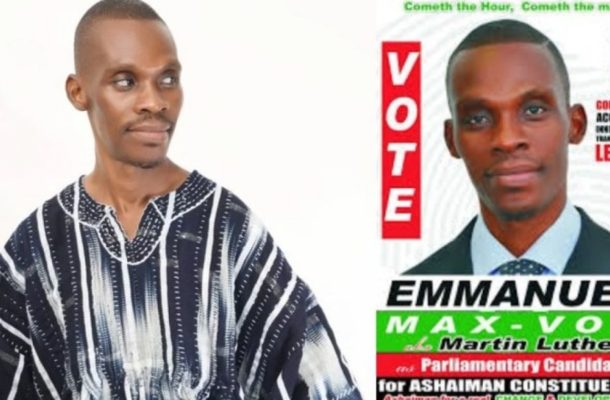 A parliamentary aspirant for the Ashaiman Constituency on the ticket of the opposition National Democratic Congress (NDC),Mr. Emmanuel Max Voy has passed away days to the election.

Mr Max-Voy, also known as Martin Luther, was the proprietor of the Martin Luther King School in Ashaiman and a business man.

The deceased was the only contender of Mr Ernest Norgbey, the incumbent Member of Parliament for Ashaiman.

He successfully filed his nomination about two weeks ago.

Emmanuel Max Voy last four years was one of the main aspirants hoping to unseat the then incumbent Member of Parliament for Ashaiman and the Deputy Majority Leader of Parliament, Alfred Agbesi.

He made a come back this time round to unseat the first-term MP, Ernest Henry Norgbey but his health failed him where he gave up the ghost on Sunday night.

The news of his death comes days after Kafui Augusta Takyi, an aspirant seeking to contest in the parliamentary primaries for the Afajato South constituency became paralyzed days after she picked up forms to contest the seat.

Members of the NDC will be voting on August 24, 2019, to elect parliamentary candidates nationwide to represent them in the 2020 election.

Meanwhile, a book of condolence will be opened to the general public at the Martin Luther King Jr. School, Lebanon branch and New Happy Home Academy, Ashaiman New-Town from Tuesday, 6 August to Sunday 10 August 2019.