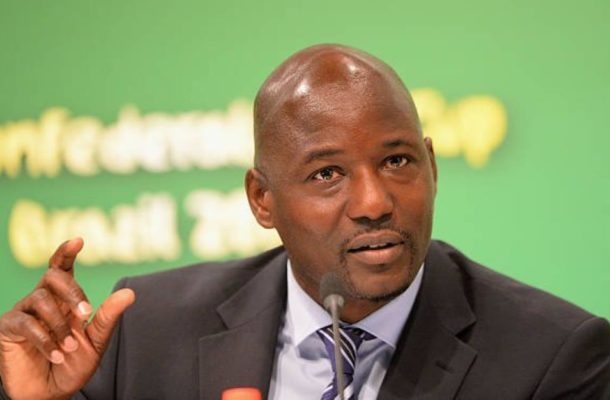 African legend and CAF Deputy General Secretary (Football & Development), Anthony Baffoe, shares his heartening humble beginning that should serve as a model for aspiring footballers on the continent.

Former Ghana international Anthony Baffoe epitomises everything desirable in a sporting icon so much so that after his successful football career, he remains relevant in the scheme of African and global football things many years after he hung his playing shoes.

Usually referenced ‘as the son of a Ghanaian diplomat’ and the ‘much-travelled footballer who played for clubs on four different continents’, Baffoe has yet explained his modest beginning while eking out a living right from his amateur days.

Such single-mindedness and fixity of purpose has helped Baffoe’s devotion to the development of African football. At various times, Baffoe has held some key appointments including Director for International Relations for the Ghana national football team and founder and General Secretary of the Professional Footballers Association of Ghana. He was also a FIFA Ambassador for campaign against racism, FIFA ambassador for SOS Children’s Village, an ambassador for Play Soccer Ghana and member of the Bundesliga Legends Network.

“I was always interested in management and organisation,” Baffoe further told The Nation about his well-planned life after his football career. “I coordinated many events before I became the Deputy General Secretary in charge of Football & Development (at CAF).

“Coaching never came in to my mind though I am a holder of the highest African licence.

“I read a lot of books about successful CEOs and top managers and also about Wole Soyinka, Nelson Mandela, Mahatma Ghandi, Steve Biko etc. .It shaped my way of thinking and what I wanted to do with my life after football.”

Of course, there is life outside the family for Baffoe, and from his responses, it is easy to decipher that he’s a devoted family man despite the fact that he’s truly a citizen of the world with mastery of several international languages.

“My future dreams are all focused on my family; that my mum stays healthy, that my wife and kids have long life,” he said about his family. “I met my wife (veteran Ghanaian thespian Kalsoum Sinare Baffoe) in 1992, we have been married since 1994 – 24 years.

“She is my pillar, my backbone, my best friend, a woman with character and a very big heart for children and people in general.

Yet Baffoe recalls his childhood years as if it were today.

“My best childhood memories? Playing with all kind of kids from different diverse backgrounds,” he volunteered. “What can make me laugh and cry? Children and when human beings are maltreated. Movies like back in the day Roots (The saga of an American family) by Alex Haley.”

As with life, that whatever goes round comes around and we are back from where we started: football and Baffoe shares his thoughts about African football post the FIFA World Cup Russia 2018 as well as his rule of thumbs for budding African stars.

“African Football has a lot of potential and talent,” he said. “At the WC 2018 in Russia, for the first time, there were no issues about money and indiscipline – now we need to fine-tune the details.

And his final words for African young stars: “To study and play football and they should always remind themselves that tomorrow it can be over. There is no elevator to success you-you have to take the stairs.”