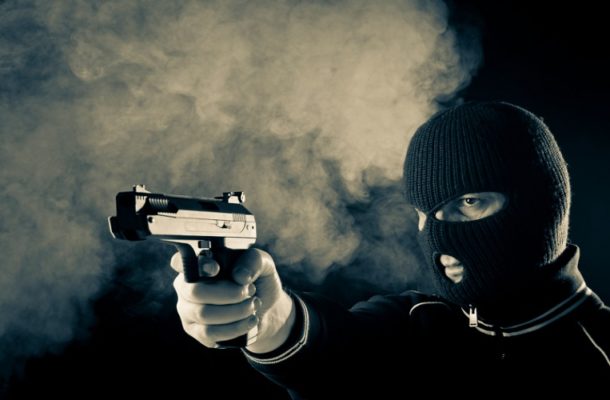 A four member gang of armed robbers has gone on robbing spree in some communities of the New Juaben Municipality in the Eastern Region subjecting their victims to terror and robbing them of their valuables.

The armed robbers wielded pump action guns, hammer,pinchbar,cuttlass attacked at least six houses within an hour and half period on Thursday dawn.

The armed robbers attacked three houses around Koforidua Technical Institute(KOTECH) area, stole monies, mobile phones, laptops, and other items amidst beating of some of their victims.

The armed robbers are suspected to be same gang which moved to Adweso-SDA School area to robb the Second Minister of the Trinity Presby Church on the same night.

Meanwhile same day at about 3:20am, a 41 year old man Elvis Kotey living at Democracy Area also reported to the Effiduase District Police Command that about 1:20am he was at home with his family when a group of young men numbering about four all wearing face mask wielding pump action gun, hammer and cutlass forceful broke into his four bedroom house and made away with two 32inches hi-thermal cool plasma TV, One dell laptop, sound system, one galaxy A5 phone, one samsung 7edge and cash the sum of $100.

He said the armed robbers scaled over the wall, caused damage to the main door, entered and at  gunpoint robbed the occupants.

Residents in the affected areas tells Kasapa News, Police must intensify night patrols in their communities.