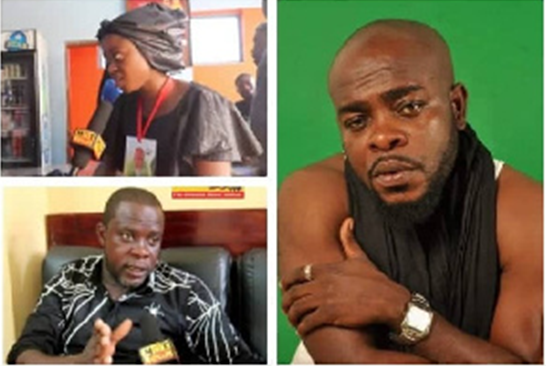 Sister of legendary late Highlife Musician, Kofi B, Belinda Obeng has called on Ghana Police to arrest highlife musician Afenfo for saying it’s good the ‘Mmobrowa’ hitmaker has died.
It would be recalled that, Karim Alhassan aka Ahenfo who is out with the hit song “Odo Mu Odo” featuring Kofi Kinaata in his remarks about the death of Kofi B revealed that though unexpected, is an indication it is time for him [Ahenfo] to shine.

“Even though it’s sad that Kofi B has died, I think it’s good that he is dead because I believe God took his life to pave way for me to replace him… He was doing dormant singing – the same type of singing I do so he died so that Ghanaians would also see the talent in me,” he told HotNewsghTv.

Reacting to Ahenfo’s remarks in an interview with Sandra– host of Showbiz on HotNewsgh TV, Belinda Obeng who is the younger sister of Kofi B, accentuated sorrowfully that it’s extremely unusual for a person in his right senses to make such derogatory comments at the time when Ghanaians have expressed shock to the demise of her beloved brother.

According to her, the Ghana Police must arrest and investigate the ‘Odo Mu Odo’ crooner in order to ascertain the real motive behind his comments.

“I believe that in this world, death is a profit to every Christian… though it’s painful,...it’s not easy to lose an elder brother who has made you great just like that…so for the Musician(Ahenfo) to say that he is happy my brother is dead I don’t know why he said that…so I think if the Police can arrest and investigate him that would be great because it’s very strange for him to make such comments at the time when every Ghanaian is distressed at my brother’s demise”.Belinda told HotNewsghtv during the one-week commemoration of her departed brother at Achimota on Sunday.

The one-week celebration was graced by high profile personalities, fans as well as musicians and celebrities across the country. Kofi Boakye Yiadom, better known as Kofi B died on Sunday, February 2, 2020, prior to a scheduled performance at a concert in Cape Coast in the Central region.

The ‘Mmobrowa’ singer, according to colleague musician Kofi Nti, complained of chest pains and unusual heartbeat for which he was rushed to the hospital immediately where he suddenly died

He was known for songs such as “Mmbrowa”, “Bantama Kofi Boakye” “Belinda; “Koforidua Flowers” and among others.