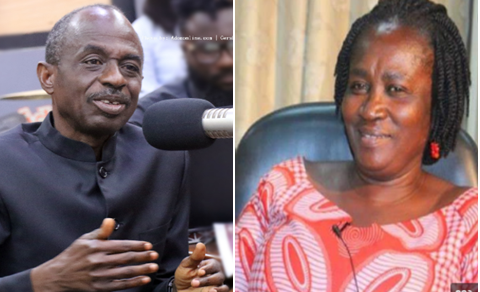 General Secretary of the opposition National Democratic Congress, Johnson Asiedu-Nketia, says the running mate of John Mahama, Professor Jane Naana Opoku-Agyemang is one of her closest friends and will, therefore, support her immensely to enable the party recapture power.

“When he [John Mahama] chose Naana, it became a surprise. Naana is a person, if you care to know she was one of the ministers I was very close to.

“When I traveled recently to Cape Coast for the ongoing registration, she took me home and cooked for me to eat, saying she will not allow me to eat outside,” he said on an Accra based radio station.

“I’ve heard some NPP people saying General doesn’t feel fine, he is not a happy man. Please I haven’t appointed anyone as my spokesperson. I’m very very happy about Naana’s position. I will do everything to ensure NDC recapture power," the man from Tain constituency said.

On the rumours that some party bigwigs were not happy with her choice of running mate, General Mosquito said it was somehow true but “after engagements unanimously everyone agreed with the choice.”

“The way the flagbearer [Mahama] handle the case was an excellent one. He did lots of consultations. I was happy that the decision making process was rigorous”, he emphasized.

“16 regional Chairman eventually unanimously agreed to the choice of Naana,” he added.