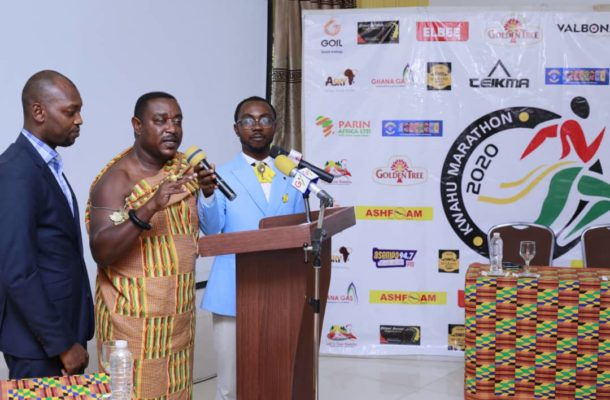 According to the organizers, this year’s marathon is scheduled for Saturday 11 April 2020 during the Easter festivities at Kwahu.

The event has marked for a 21 kilometers race through the principal streets of Kwahu Mpraeso starting from the Kwahu GOIL Filling Station and finishing at the Kwahu Traditional Council.

This year’s event has been reduced from 42 to 21 kilometers due to the nature of the mountainous area of Kwahu which exuded every strength from athletes in previous years as juxtaposed to World Athletics Marathon of 42.198 kilometers.

The representative of the Kwahu Paramount Chief, Daasebre Akuamoah Agyapong Said, "the previous edition has produced a lot of athletes and one of them is William Amponsah a record holder in both 5,000 and 10, 000 metres who went ahead to break Malik Yakubu record of 32.29 minutes set in 2018 GASA games in Tamale and set a new record of 29.53 minutes in 10, 000 metres event at 2020 Ghana Universities Sports Association (GUSA) games which was held early this year at the University of Ghana, Legon. He encourage people to come in the numbers to witness fascinating event. He also appeal to cooperate bodies to come on board to sponsor this historical event.

The Chief Executive Officer (CEO) of Ghana Athletic Association (GAA), Mr. Bawah Fuseni revealed that, the organizers of the marathon has officially written to the Association for permit and recognition. He assured the organizers, the GAA will get the permit for them and also recognized them. The association will also give them a chief Coach during the event.

"When we observed them and know they had attain the International standard, we will at least request the IAAF and CAA to get them a bronge label that will attracts International athletes to join.

Some of the Personalities that were presence at today's launch includes; Daasebre Akuamoah Agyapong, a representative from Kwahu Paramount Chief, General (CEO) of the Ghana Athletics Association, Bawah Fuseini, Sponsorship Manager of the Kwahu Easter Marathon, Henry Senyo, Project Manager, William Ezah including Kweku Amevor Wilson, Director of Sports at the NSA and Dr. Ofosu Asare.

The winner of the 2020 Marathon will be flown by ASKY, a sponsor of this year’s event, to South Africa for an international Marathon later this year to boost his/her capabilities.