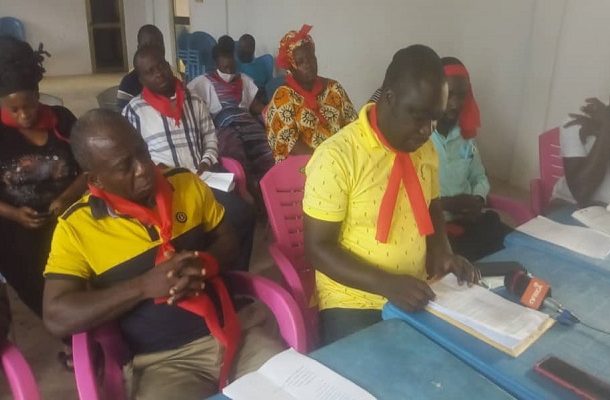 Concerned Youth of Atiwa West has asked the NPP National Women’s Organizer, Mad. Kate Gyamfua to retract and apologize on a statement she made against Hon. Amoako Atta or face the action of the youth within 24 hours.

Madam Kate Gyamfua has allegedly accused the Roads and Highways Minister, Amoako Atta, of constructing and tarring roads in his Constituency leaving other deplorable roads in other parts of the country.

“Tell Amoako Atta that he was not made Roads and Highways Minister because of roads in his Constituency. Look at the number of world-class roads Amoako Attah is constructing in his hometown – Kwabeng and other communities. What have we done wrong in Akwatia and its environs to deserve these bad roads? If you are made road Minister, you must also look at other places to construct the roads,” she purportedly said.

According to the concerned Youth, they see the statement of Mad. Gyamfua as one to court public disaffection towards the Road Minister therefore seeking an apology or immediate action will be taken against her within the next 24 hours.

“No amount of vilification and propaganda against him will succeed and we urge the public to denial with the utmost contempt it deserves.”

“We are calling on her to retract and apologies within 24 hours or be ready to park out of our land which she is earnestly destroying,” they lamented.

They pointed out that the statement seeks to suggest that Hon. Amoako Atta is a self-centered man who only thinks of his home people at expense of other Ghanaians.

They rubbished the claim stating that “that is not the true reflection of the personality of Amoako Atta but he is a man of the people who has all Ghanaians at heart and therefore doing all he can to make our roads motorable.”

In a press conference today, the concerned youth stated that the Atiwa-West road has benefited Mad. Gyamfua since her mining excavator passes on there.

“It is important to note that she is one of the biggest beneficiaries of the road projects ongoing in the constituency since her mining heavy-duty cars use the road daily.”

They revealed that Mad. Gyamfua is holding the biggest concession of mining in the Atiwa-West but the community has not benefited from her mining company.”

“Madam Kate Gyamfua has over the past ten years been mining in the Atiwa enclave and as at today holds the biggest mining concession in the constituency, and with this can she happily point to project a community within the constituency has benefited from her mining company?” they quizzed.

They described her actions as “shallow thinking and hatred in her heart towards our MP due to his dislike for mining activities in the constituency.”