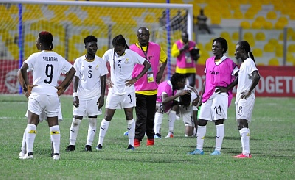 The Black Queens took home a little over GH¢12, 000 for their group stage exit from the ongoing 2018 Women’s Africa Cup of Nations, starrsportsgh.com has gathered.

The money is a sum up of their total per diem allowance as well as donations received from the Sports Ministry, Speaker of Parliament and Chief of Staff.

According to Starr Sports sources, per diems paid each player up till Saturday, November 24, totaled GH¢6,000.

Starrsports is also informed that the Sports Ministry moved to spur on the Queens prior to their must-win final group game against Cameroon with GH¢4,000 handed each player with a special package promised the team after advancing to the semifinal. The team, however, failed to beat the Indomitable Lionesses and hence exited the competition.

It will be recalled that just days before the 2018 Women’s Afcon kicked off, the Black Queens received a GH¢50,000 donation from the Speaker of Parliament. Each member of the squad of 21 pocketed GH¢1,500 from the sum.

The Black Queens also received a GH¢20,000 gift from the office of the Chief of Staff with each player receiving GH¢650 of the sum as their share.

Too much focus on money?

Ghana’s head of delegation at the 2018 Women’s Afcon, Cudjoe Fianoo blamed the hosts’ disappointing output to an unfortunate switch in focus, unpaid arrears.

“Some of the players wanted to use this tournament as a basis to demand old outstanding bonuses due them,” Fianoo said in interviews with the local media.

“So the [Ghana football] Normalization Committee and the Sports Ministry spoke to the girls to keep their focus on this tournament while they worked with Finance and Accountant General to sort out the outstanding bonuses.

“However, the ministry gave the girls some money as a form of motivation and I can tell you that even the bonuses they were supposed to get for this tournament were doubled.

“But the truth is the money issues made the team lose focus.”

The Black Queens did not only miss the opportunity to win their first ever Women’s Afcon title on home soil but also lost out on returning to the Fifa Women’s World Cup.