Bahrain match will be even tougher , says Oman's Talib Hilal 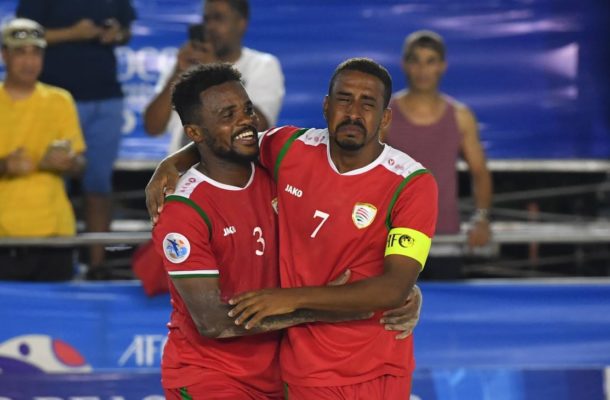 Pattaya: Oman head coach Talib Hilal has already moved on from his side's stunning win over Islamic Republic of Iran, declaring their AFC Beach Soccer Championship Thailand 2019 quarter-final against Bahrain will be an even more difficult task.


The 4-3 win over the reigning champions saw Oman top Group D, and announce their credentials as potential Asian champions, but it will count for nothing if they fail to repeat the dose against Bahrain in the last eight.

While understandably pleased with his side's success against Iran, the highly experienced Hilal said the instant elimination that will follow any slip up against Bahrain makes the coming match an even tougher challenge.

"The past is past, and now that becomes history. We are focused on tomorrow's match. I respect any team in this tournament no matter who is who," he declared.

"I know the match will be more difficult than yesterday, because in the group stage you have two or three matches, so if you lose one you can recover in the next match, but in the knockout stage if you lose, you are out.

"Insha'Allah, we will do our best. I know the match will be very difficult because of the pressure of the match. We must win to qualify for the semi-finals and we will be well prepared."

"Each game has its own tactics. Iran had their own system, and Bahrain have their own system, so I focus on how Bahrain play and how we play against Bahrain, but the spirit of the team will be the same. This is important," he concluded.

Hilal is a respected figure in the beach soccer world for his achievements both at club level and in the international game, where he guided Oman to World Cups in 2011 and 2015.

He is potentially two wins away from sealing a return to the global stage; a task he knows will be far from straightforward.

"I wish all the best for all the remaining teams," he said.

"I hope tomorrow's game is very difficult. We are two teams from the Gulf, so we know each other very well, and Bahrain want to go the World Cup, so they will fight and it will be tough. It's not easy. For me, its a difficult match."

Meanwhile, Bahrain head coach Mahmood Al Ghawi revealed Oman had been his preferred knockout stage opponents; a scenario he believed had disappeared after his side's 6-2 Matchday Three loss to Japan.

"The truth is, we wanted to win against Japan so we could avoid Iran," said the 37-year-old.

"We wanted the Oman team, and Oman surprised everyone yesterday, so now we will play against Oman.

"Oman was a big surprise. They were warriors as a team yesterday, and we know it will be a very tough game for us."

One thing making Bahrain's task even tougher is the suspension of two players, with Hesham Ahmed and red-carded Isa Al Doseri both ruled out of the Thursday's clash, although they will welcome back captain Mohamed Ashoor.

"We have two players missing, one had two yellows cards and the other had a red card," Al Ghawi said.

"It's very difficult, but nothing is impossible."