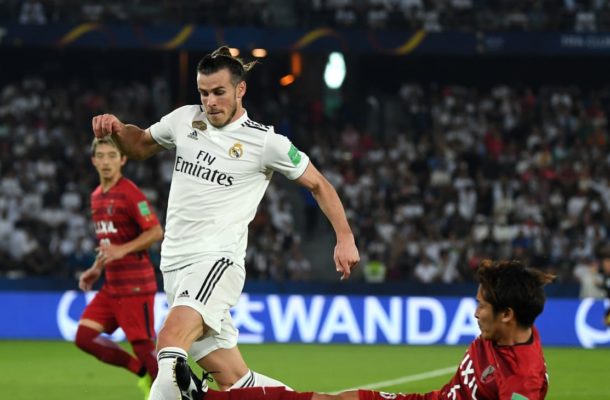 
Kashima managed to keep the European champions at bay for 44 minutes but a devastating spell either side of half-time consigned them to a 3-1 defeat and a third-place playoff against River Plate.

When Kashima and Real last did battle in the 2016 FIFA Club World Cup final it was a Cristiano Ronaldo treble that proved the difference but this time it was Los Blancos’ Welsh wizard showing his ruthless streak in front of goal.

Bale missed his side’s recent La Liga game with Rayo Vallecano with an ankle injury but showed no ill-effects at Zayed Sports City Stadium in Abu Dhabi, threatening the Kashima defence each time he picked up the ball in the first half.

Real’s No. 11 finally broke the deadlock a minute before the interval, exchanging a clever one-two with Marcelo before side-footing calmly past Kwoun Sun-tae.

If Kashima had designs on getting back in the match, they quickly dissipated at the start of the second-half thanks to a calamitous piece of defending by Jung Seung-hyun.

The Korea Republic international mistakenly knocked the ball away from onrushing keeper Kwoun on the edge of the penalty area, leaving Bale free to pass the ball into an empty net.

Just two minutes later it really was game over for Kashima. The Japanese side’s defence was all at sea as Marcelo turned provider again, stabbing the ball to Bale on the inside left of the box, the Welshman smashing a super effort into the top corner to complete his hat-trick.

Bale, who was also Real’s match-winner in last year’s semi-final against Al Jazira, became only the third player after Lionel Messi and Ronaldo to score in three different FIFA Club World Cups. He has now netted six goals in total, leaving him one short of Ronaldo’s tournament record.

Although the match was over as contest, the Asian champions did manage to grab a consolation goal as Shoma Doi struck a powerful shot past Thibaut Courtois, with VAR confirming Kashima’s players were onside in the build-up.

Doi had also scored in the 2016 FIFA Club World Cup semi-final but there was to be no repeat of that year’s heroics against Atletico Nacional as Madrid held on for a 3-1 victory.

And while Los Blancos reached their fourth FIFA Club World Cup final in five years, the wait for an AFC Champions League winner to reach the final goes on.