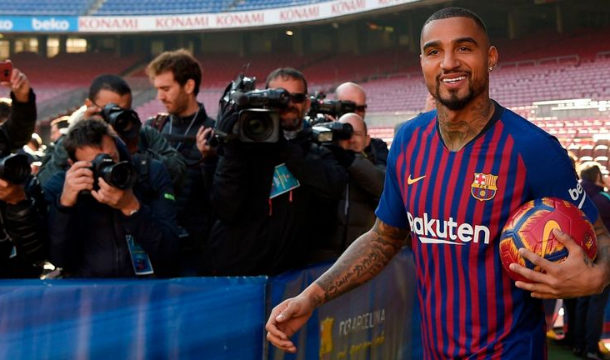 Barcelona are looking for options up front after the injury of star striker Luis Suarez and the Catalan giants are looking at re-signing Kevin Prince Boateng on loan.

The Ghanaian forward joined Barcelona around the same time last season and spent six underwhelming months at the Camp Nou but Barcelona may be about to hand K.P Boateng another life line.

Boateng who current plays with Fiorentina has struggled  with the Violas for game time and even on the pitch but reports in the Marca from Spain has linked the Ghanaian with a possible return.

Luis Suarez has been sidelined for up to four months after suffering an external meniscus injury on the right knee.

Initial fears about the Suarez injury was a break of four to six weeks but its far serious than initially feared.

The Uruguay International has scored 14 goals and 11 assists in 23 games in the current season.

Barcelona may have to rely on Antoine Griezman upfront and occasionally Lionel Messi but may need a back up for the striking position with Dembele a long term absentee.

New Barcelona coach Quique Setien knows K.P Boateng so well as they worked together at Las Palmas in the  2016/17 campaign where the Ghanaian enjoyed a good spell in front of goal.