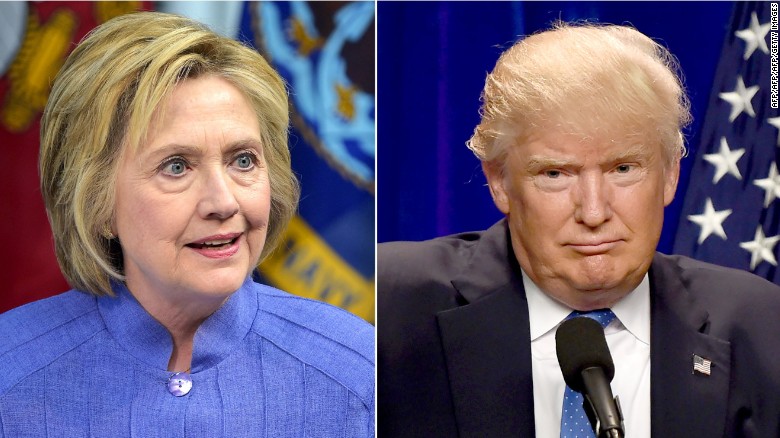 (CNN)Hillary Clinton holds commanding leads over Donald Trump in a trio of states that the GOP nominee has made central to his White House bid, according to polls released Thursday following both party's national conventions last month.

In New Hampshire, Pennsylvania, and Michigan -- states that have trended Democratic in recent elections, but whose economics and demographics seem to pose an opening for the GOP nominee -- Clinton has made strides in improving her favorable ratings, while Trump remains challenged by high unfavorable ratings and resistance from a significant portion of Republicans.

A new poll of New Hampshire shows Clinton with a commanding 15-point lead over Donald Trump, finding Granite State Democrats coalescing around their nominee after their convention while state Republicans remain resistant to Trump.

Clinton leads Trump 47% to 32% among likely New Hampshire voters, according to the poll from WBUR, with third-party candidates Gary Johnson and Jill Stein included. Matched up one-on-one, Clinton's lead grows to 17 points, 51% to 34%.

Both candidates continue to suffer from challenging unfavorable ratings, though Clinton has made strides improving her marks following the conventions. The Democratic nominee now breaks even, with 45% saying they view Clinton favorably to 45% who say the opposite -- up from a -23 spread in a WBUR poll from May. Trump is viewed favorably by 29% of likely New Hampshire voters, against 60% who have an unfavorable opinion -- a slight decline from May.

The WBUR survey also asked likely New Hampshire voters what they thought about each party's national conventions. Fifty-six percent said they thought Clinton emerged from the convention "much stronger" or "a little stronger," compared to 39% who said the same about Trump and the RNC.

The poll also found Democrats with an edge in the state's U.S. Senate race. Democratic Gov. Maggie Hassan leads incumbent GOP Sen. Kelly Ayotte 50% to 40%. New Hampshire is among a few close races in swing states in a year where control of the Senate could come down to just one or two changing seats.

The WBUR New Hampshire poll was conducted from July 29 through August 1, and surveyed 609 likely New Hampshire voters. The margin of error is +/- 4 points.

In Pennsylvania -- a Democratic-leaning Rust Belt state that Trump has vowed to put in play for the GOP this election -- another poll released Thursday showed Clinton leading Trump by double digits.

Clinton leads Trump 49% to 38% among likely Pennsylvania voters, according to the Franklin and Marshall College poll. Her lead swells to 13 points, 47% to 34%, with Johnson and Stein included.

Both Clinton and Trump struggle with high unfavorable ratings among likely Pennsylvania voters, but as in New Hampshire, Clinton has an advantage over Trump on this measure. Forty-seven percent said they view the Democratic nominee favorably to 49% who view her unfavorably, while Trump's spread -- 33% favorable to 62% unfavorable -- is further underwater.

Consistent with previous presidential elections in Pennsylvania, the Republican nominee's biggest leads are in the southwest region of the state, while Clinton's advantage is in the northeast, most notably in Philadelphia.

Clinton is ahead of Trump by 9 points, 41% to 32%, among likely Michigan voters, according to a Detroit news/WDIV-TV poll. Clinton's lead is smaller, 6 points, without third-party candidates included.

Pollster Richard Czuba told the Detroit News the survey found a "shocking" Clinton lead in typically reliable Republican areas in west and southwest Michigan, where she carries leads of 5-6 points. And according to the poll, 30% of self-identifying Michigan Republicans are not backing Trump.

Trump's struggles in the state's conservative strongholds are attributable in part to Libertarian nominee Gary Johnson. The poll found that in those west and southwest regions of Michigan, critical for flipping Michigan red, Johnson is drawing 10% and 16% support, respectively.

The poll also found a majority of Michigan voters -- 61% -- say Trump is "ill-prepared to be commander in chief."

The Detroit News/WDIV-TV poll was conducted from July 29 through August 1, surveying 600 likely Michigan voters. It has a margin of error of +/- 4 points.