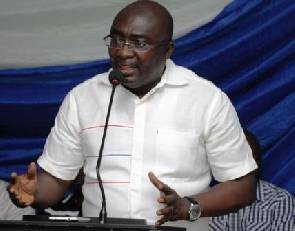 Dr. Bawumia, a former Deputy Governor of the Bank of Ghana, is expected to paint what he believes is the exact picture of the country’s economy. The event is expected to be his final lecture ahead of the December polls.

Former President John Agyekum Kufuor will chair the programme which is under the theme – “The State of the Ghanaian Economy – A Foundation of Concrete or Straw.

Change of venue
 
The NPP were compelled to change the venue for the event after the Accra International Conference Centre reportedly denied them access to the facility.

“The change in venue follows a decision by the managers of the Conference Centre (Ministry of Foreign Affairs) to deny organizers of the programme the use of the facility – 24 hours to the Public Lecture, despite earlier assurances and two days (last week Wednesday and this Monday 5th September) of technical meetings and arrangements between the organizers and technical men at the Centre, which concluded on among others, the Technical set-up for the event,” a statement signed by Bawumia’s press secretary, Kwabena Boadu explained.

The statement further assured that all is set for today’s lecture.