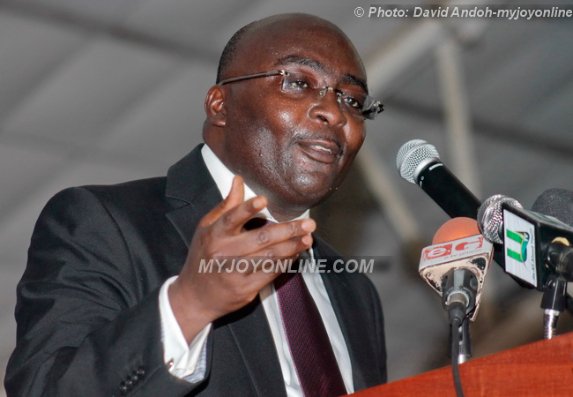 Vice Presidential Candidate of the New Patriotic Party (NPP), Dr Mahamudu Bawumia, is due to deliver a lecture on the Ghanaian economy Thursday.

The programme which takes place at the National Theatre would see the economist make a diagnosis of the challenges in the economy and profer possible solutions.

The lecture would be chaired by former President John Agyekum Kufuor under the theme “The State of the Ghana Economy – A Foundation of Concrete or Straw.”

It was initially set to take place at the Accra International Conference Centre but reports say the NPP was denied permission to use the place resulting in the decision to use the National Theatre.

Speaking to Joy News, a Member of the Event’s Planning Committee, Kojo Oppong Nkrumah says the lecture would discuss critical issues in the economy and “not exactly a naked criticism” of the system.

“What Dr Bawumia usually does, this is not the first time, is an analysis of the various economies including the Ghanaian economy and put out various papers about the causes of the problem and what the potentials are,” he said.

This is not the first time the NPP Vice Presidential Candidate would be delving into critical matters of the Ghanaian economy.

In March 2014 he delivered a lecture on the Ghanaian cedi and predicted if the governing National Democratic Congress (NDC) desists from being forthright with the problems the currency would suffer and it did.

Again, in 2015 he spoke about the shortfalls of the government's budget.

Mr Oppong Nkrumah says “what has happened over the years is that some of the things that he talks about are not taken kindly” resulting in a barrage of criticisms and “blatant insults.”

These, he says “doesn’t make him less of a man” because often he is proved right in his analysis.