Bawumia is not “matured” — Mahama fires back 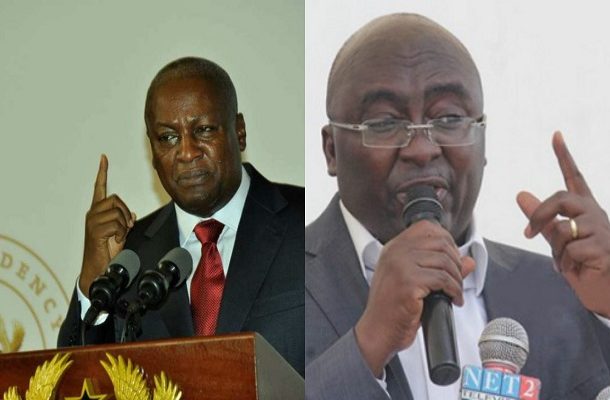 The former President believes Dr Bawumia is disgracing the high office of 'Vice President' thereby admonishing him to maintain the sanctity of his office and stop stooping to low to engage in petty politics at official functions.

Dr Bawumia in a viral video is heard referring to the decision of Former President Mahama to seek re-election as bad for the interest of the country as he [Mahama] is an 'incompetent' person to lead the country.

But in a release aimed at rebutting Dr Bawumia's claims, Mr Mahama described the Vice President's behaviour as "immature" since according to him "the office of the Vice President is conducted with grace, decency and maturity, not reckless and unrestrained talk."

He expressed shock that the underwhelming performance of the Akufo-Addo administration hasn't preoccupied the Vice President but his campaign to seek re-election has.

Read the details of the press release

The Office of the Vice President was brought into disrepute in a viral video in which Dr. Mahamudu Bawumia, whilst pretending to perform official duties, descended to his lowest to call former President John Dramani Mahama names.

It is sad to note that after nearly halfway through the four-year term of the government of which Dr. Bawumia is the Vice President, he still lacks the presence of mind to appreciate the distinction between his role as Vice President and that of his propagandist running mate days on campaign platforms.

Whilst reminding Dr. Bawumia that any needless and unprovoked attack on former President Mahama on any day will not go unanswered, we wish to remind him that the Office of the Vice President is conducted with grace, decency and maturity, not reckless and unrestrained talk.

Let him also be reminded that respect for political office holders is earned and that if he chooses to play it dirty, he will get it back in equal measure, pressed down, shaken together and running over.

We wish to draw Dr. Bawumia’s attention to the fact that whilst he is busily majoring in minors and taking to cheap and unsophisticated politics, the manifesto promises of the New Patriotic Party for which Ghanaians voted for them have yet to be fulfilled.

The promise to make Accra the cleanest city in Africa has produced the most embarrassing spectacle of filth under Bawumia’s watch; the dollar and petroleum prices have spiraled out of control; teacher trainee allowances have not been paid.

Allowances for student nurses are in arrears; one hot meal, free egg and a bar of chocolate a day for public primary school pupils have turned out to be a hoax; and the NPP government remains clueless about how to fulfill many other promises that it made.

It is shocking that Vice President Bawumia who has become the butt of all jokes in the country for his inability to match his performance on the job and the management of the economy with his numerous propagandist lectures in opposition, has the temerity to call former President John Dramani Mahama names.

Mr. Mahama and his government have a solid record of investment in education, energy, roads, healthcare and aviation infrastructure, among others and we can understand both the frustration and desperation of Dr. Bawumia and his NPP following the rousing reception which has greeted Mr. Mahama’s campaign tours in the regions.

We also wish to assure the public that nothing from Mr. Mahama’s political opponents will stop him from taking the NDC to victory in the 2020 elections so that Ghanaians can be saved from the high cost of living, job losses and general economic hardship under the NPP administration.

Finally, we wish to point out that Dr. Bawumia’s continuous silence on the suspension of the headmaster of Tempane Senior High School for allegedly allowing an NDC National Organizer hopeful to interact with students exposes the Vice President not only to ridicule but also solidifies his unenviable record as an unprincipled politician.

This is because no one has visited senior high schools to dabble in partisan politics more than Dr. Bawumia.