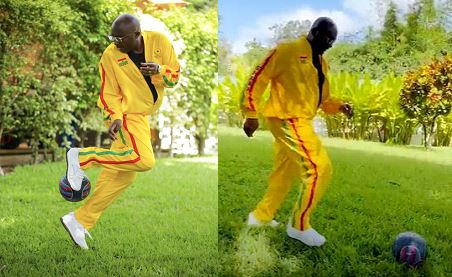 Vice President Dr Mahamudu Bawumia has called on all Ghanaians to rally behind the country’s senior national team ahead of their opening match in the ongoing 2022 FIFA World Cup in Qatar.

The Black Stars, on Thursday, November 23, 2022, will kick off their world cup campaign against Portugal who are tipped as one of the tournament’s favourites.

Ahead of the Thursday match, Vice President Bawumia has shared a message to the players and the entire nation.

A video shared on the vice president’s Facebook page opens with Dr Bawumia showing off his football skills, including a rainbow flick.

“The moment has come for the Black Stars to take on the world. We have a group of talented players who have been selected and they cannot be intimidated by anyone. I want to urge the Black Stars to play their hearts out for mother Ghana. We can stand the world; we have done it before and we can do it once again. They should go out and emulate the historic deeds of their predecessors. God bless you all, we can do it. Go Ghana go, go black stars go,” Dr Bawumia said.

Ghana is placed in Group H paired with South Korea, Uruguay and Portugal.

The Black Stars, led by Otto Addo as head coach and Dede Ayew as captain, is seeking to qualify from a tight group for the nation’s third appearance at the Mundial.
Source: Ghanaweb