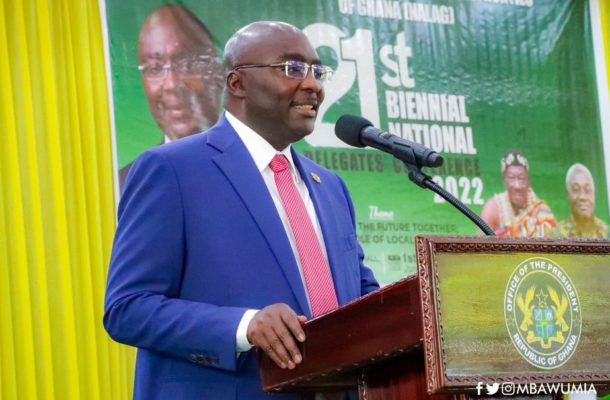 Politics has been said to be “a game of finding out where the procession is going, and getting at the head of the line” (Lovett, 1926).

Politics is also an adventure of a bewildering array of surprises and requires an extraordinary capacity to handle a rollercoaster of emotions largely associated with electoral victories and defeats.

The New Patriotic Party’s National Delegates conference just ended and while several candidates are quietly mulling their perhaps not entirely surprising loss, the most shocking of all was the rejection of its incumbent General Secretary who was running for a second term and the election of new officers in various other capacities.

At this event Mr. Fred Oware, who is Chief of Staff at the Office of the Vice President, confirmed the Vice President’s intent to run for the presidential nomination of the New Patriotic Party (NPP). Other persons within the NPP who have either openly or subtly expressed their desire to contest the primary include: Dr. Owusu Afriyie Akoto, Alan Kyerematen, Kwabena Agyepong, Boakye Agyarko, Joe Ghartey, Kennedy Agyapong and perhaps a few others.


While I assume all who will contest would be in the race to win, it is also quite possible some of them might be distractive or “show” candidates whose sole aim is to diminish the support of any of the key contenders in favour of another.

Again, some would project the longevity of their service and sacrifice to the party as the reason they should be preferred; while others might seek to draw on a certain political heritage by virtue of their membership of a lineage with deep roots in the party and suggesting that their association with that lineage cements their place as the true heirs to the political throne.

The obvious outsider in all of this is the Vice President, Dr. Mahamudu Bawumia. The Longman’s Dictionary defines an outsider as someone who is not accepted as a member of a particular social group. Dr. Bawumia, who in spite of his family background as the son of Alhaji Mumuni Bawumia, a founder member of the Northern People’s Party (later subsumed into the United Party, now the NPP) until his nomination as the Vice Presidential Candidate of the NPP for the 2008 elections, was not a member of the NPP.

He was a Deputy Governor of the Bank of Ghana and had very little political experience. His nomination as vice presidential candidate was met with uproarious and rancorous reactions from key members of the party with some openly declaring their withdrawal from the NPP’s electoral campaign of that election year.

Since then, he has been vice presidential candidate in four elections, with the NPP losing and winning the initial two and subsequent two elections respectively. All of these notwithstanding, it may appear he has not been successful in gaining acceptance in some key constituencies and among some aficionados of the party.

In a recent interview on OYEREPA TV, former General Secretary of the party, Kwabena Agyapong said “Dr. Bawumia should be content and grateful to end his political career as vice president given that he was brought from nowhere all the way to the position of vice president”.

Indeed there have been several other subtle allusions to ethnicity and religion as reasons why Dr. Bawumia should not be the candidate of the NPP for the 2024 elections, all these clearly suggestive of an outsider who is perceived as unsuitable to lead the party.

Dr. Bawumia however presents an interesting quandary for the party. The NPP with the exception of the 1996 elections has always presented a ticket that had a south-north representation and it appears more likely than not that this tradition would be repeated in the next election.

Further, the NPP has persistently been morbidly unpopular among Muslim and Zongo communities while it enjoys a modest but latent support in the regions of the North. It has been loudly touted as an “Akanistic party” that merely uses Northern elites to achieve its purposes and dumps them afterwards. Dr. Bawumia, an ethnic Mamprugu from the North East Region and as vice presidential candidate has been hugely influential in hiving off support from political opponents in favour of the NPP in several regions of the North.  His wife, Hajia Samira Bawumia, an ethnic Fulani and a Zongo indigene has distinguished herself as an eloquent, forceful and impactful advocate of her political positions. It is uncertain if these factors will translate into votes albeit that the vice president and his wife tick all these key boxes. In many ways, a Bawumia candidature also offers the NPP an opportunity to effectively extinguish the tags of being anti-Muslim, anti-Zongo, anti-Northerners and being Akanistic.

On the other hand, the vice president, an economist, banker and Head of the Economic Management Team (EMT) has had a dwindling reputation on the heels of a wobbly economy over the past several months. In the years preceding the NPP’s recent electoral victories, Dr. Bawumia the most dominant persona of the party’s campaigns. He was the heavy hitter, the economic whizz-kid who was hobnobbing with the most eminent apparatchiks of his party and had many transfixed and deeply engrossed at his sterling lectures on the economy.

The recent challenges in the economy have, however, wrought doubts about his actual capacity in the minds of many. While it is evident some of the challenges can be attributed to the ravages of the COVID-19 pandemic and more recently the structural vulnerabilities of the economy to external factors such as the Russia-Ukraine war, majority of Ghanaians expressly attribute these to a sub-par performance by the EMT; more so in recent times. The radio airwaves, TV screens and social media are replete with sound bites and videos of his speeches and commentary that appear to starkly contrast our present reality as a country and economy.

There have been some contradictions or several instances of an obvious backtracking from previously expressed and implemented policy measures on a variety of issues e.g. reversal of the port benchmark values, luxury car tax, taxation on mobile money transactions and what appears to be an inglorious return to the International Monetary Fund (IMF).

All these make the vice president quite easily prone to political propaganda, a fact his political opponents would not relent in latching on to and exploiting fully. Nonetheless, two years is still a long period in politics and the EMT, of which he is head, still has the chance to change the narrative and present a more hopeful economic outlook that ameliorates his apparently sullied image and bolsters his electoral fortunes within his party.

Many independent thinkers still consider Dr. Bawumia a pristine quality political product whose political brand has been tainted primarily by his designation as the head of the EMT and the apparent dissimilarity between the promise and imagery of economic buoyance and the current reality of widespread hardships. Hopefully we get to tell a more palatable story of the economy in the next several months or couple of years.

The writer is a Marketing Strategist and lecturer